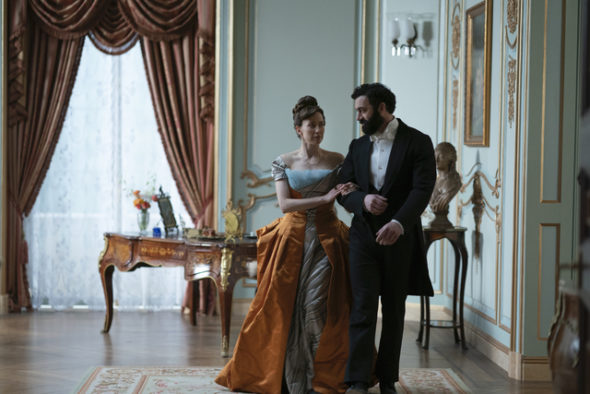 Who will come out on top in the first season of The Gilded Age TV show on HBO? As we all know, the Nielsen ratings typically play a big role in determining whether a TV show like The Gilded Age is cancelled or renewed for season two. Unfortunately, most of us do not live in Nielsen households. Because many viewers feel frustrated when their viewing habits and opinions aren’t considered, we invite you to rate all of the first season episodes of The Gilded Age here. *Status update below.

What do you think? Which season one episodes of The Gilded Age TV series do you rate as wonderful, terrible, or somewhere between? Do you think that The Gilded Age should be cancelled or renewed for a second season on HBO? Don’t forget to vote, and share your thoughts, below.

Now that the first season of “Gilded Age” is complete (and having enjoyed it immensely) I’ve been reading about cast changes for season two. During the first season, one of the most endearing characters was Mrs. Chamberlain, who was shunned by New York society elite at the time, despite her extreme wealth and passion for exquisite art. Mrs. Chamberlain had an interesting back story, having had an affair with a very wealthy man while he was still married. The two fell in love, and they married after his wife died. But as a result, she was scorned by New York’s… Read more »

I love The Gilded Age! Great story lines, great acting, beautiful costumes, and pageantry. I’ve always been fascinated with the Gilded Age in America, including New York’s and Newport’s old families. My fascination increased after visiting the Newport mansions of that era several years ago. This story is peppered with real life family names (e.g., the Astor’s), with the main family (the Russell’s) being fictitious; supposedly created loosely on the real life railroad magnate of that period, Jay Gould. The stories are educational, showing the protocols and decorum requirements of the day related to the classes in society. Knowing how… Read more »

Horribly disappointing. Fake terrible acting. Nothing good to say about it. Cancel it

Terrible. Looks like it was filmed in the 80’s. Casting is awful. The main character and many others are flat.

Too many characters! It’s a. BEautiful episode. Love the costumes