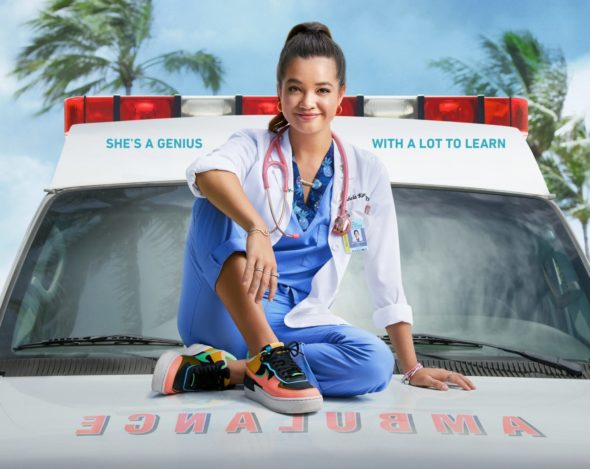 This doctor is staying “in”. The Disney+ streaming service has renewed Doogie Kamealoha, M.D. for a second season. The first season of 10 episodes finished airing in October. There’s no word yet about when season two will be released.

A coming-of-age medical dramedy, the Doogie Kamealoha, M.D. TV show is inspired by the 1989-93 Doogie Howser, M.D. series. The reboot stars Peyton Elizabeth Lee, Kathleen Rose Perkins, Jason Scott Lee, Matthew Sato, Wes Tian, Emma Meisel, Mapuana Makia, and Jeffrey Bowyer-Chapman with Alex Aiono and Ronny Chieng in recurring roles. Set in modern-day Hawai’i, the story follows Lahela “Doogie” Kamealoha (Peyton Elizabeth Lee), a 16-year-old prodigy who juggles a budding medical career with life as a teenager. With the support of her caring and comical ‘ohana (family) and friends, Lahela is determined to make the most of her teenage years and forge her own path.

Check out our status sheets to track new TV series pickups, renewals, and cancellations. You can find lists of cancelled shows here.
What do you think? Have you checked out the Doogie Kamealoha, M.D. TV series on the Disney+ streaming service? Are you glad to hear that the show has been renewed for a second season?

Are we shocked this is renewed? No we’re not because everybody knew this was gonna be with you no matter how bad the 80s were going to be. So be it but then again it’s the reason why I no longer pay for satellite TV

Satan
Reply to  Can I be true

Well this is a streaming series on Disney + so your lack of satellite TV really isn’t going to impact them one way or the other.

I saw one epsiode of this show and it did nothing for me, but I can see where it might appeal to the Disney audience.

And as far as reboots go… this one probably resembles the original more than most of those embarrassments on CW do.

Can I be true
Reply to  Satan

Well to each their own