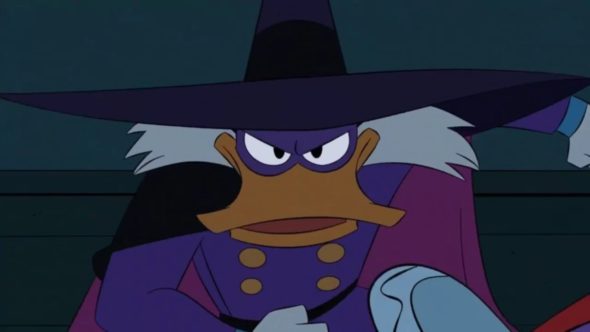 A new Darkwing Duck series may be coming. A reboot of the 1990s animated series is in early development at Disney+. Seth Rogen, Evan Goldberg, James Weaver, and Alex McAtee are set to executive produce the series.

This news comes not long after the character appeared on a special episode of DuckTales which aired in October. The original Darkwing Duck animated series aired on Disney Channel for 91 episodes and three seasons.

Per Variety, the series follows “the titular duck superhero, who lived an ordinary suburban life under the secret identity of Drake Mallard. He is assisted in his crime-fighting by his sidekick and pilot Launchpad McQuack.”

It is not known when this series would arrive on Disney+.

What do you think? Are you excited for the return of Darkwing Duck? Would you watch a rebooted series on Disney+?

I loved the original. Also loved duck tales and the old Mickey cartoons. Hate the new cartoon style, it just ruins it for me. So while I love the idea, probably going to stick to watching the originals.

Agreed with you original was the best classic show so good go adventure ducktales and never watch Darkwing not born yet but love ducktales always hooked intro every time on VHS back in days.

Never watch this as kid as original love cartoon on Disney Channel I heard of it. How many remake are going to make stupid idea. Keep original stuff alone deserve to be.