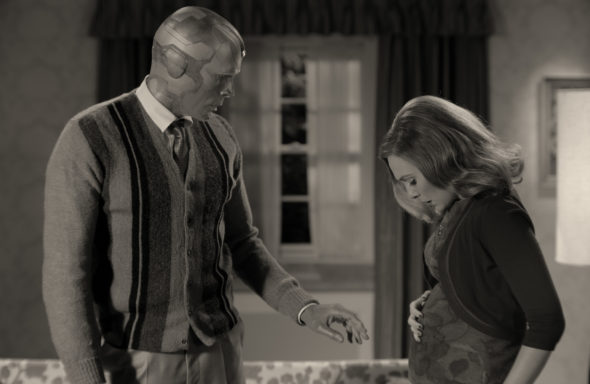 How many tropes can a TV series use? Has the WandaVision TV show been cancelled or renewed for a second season on Disney+? The television vulture is watching all the latest cancellation and renewal news, so this page is the place to track the status of WandaVision, season two. Bookmark it, or subscribe for the latest updates. Remember, the television vulture is watching your shows. Are you?

Streaming on the Disney+ subscription service, the WandaVision superhero series is set in the Marvel Cinematic Universe and takes place after the events of the Avengers: Endgame feature film. It stars Elizabeth Olsen, Paul Bettany, Kathryn Hahn, Teyonah Parris, Kat Dennings, and Randall Park. The story revolves around Wanda Maximoff (Olsen) aka Scarlet Witch, who can harness magic and telekinesis, and Vision (Bettany), her android companion. In the TV show, the two super-powered beings are living the ideal suburban life in the town of Westview while trying to conceal their powers. As they begin to enter new decades and encounter various television tropes, the couple begins to suspect that things are not as they seem.

Unless they decide to publicize viewership, it is typically difficult to predict whether Disney+ will cancel or renew a show. In this case, it seems clear that WandaVision is a close-ended mini-series so don’t expect it to continue beyond the ninth episode. Still, if the show is popular enough, perhaps producers could find a way to make a second season somehow. I’ll keep my ears open and an eye out for news, and will update this page with breaking developments. Subscribe for free alerts on WandaVision cancellation or renewal news.

What do you think? Do you like the WandaVision TV show on Disney+? Would you like to have seen it renewed for a second season somehow?

This show is so awful to watch and cast is talentless.