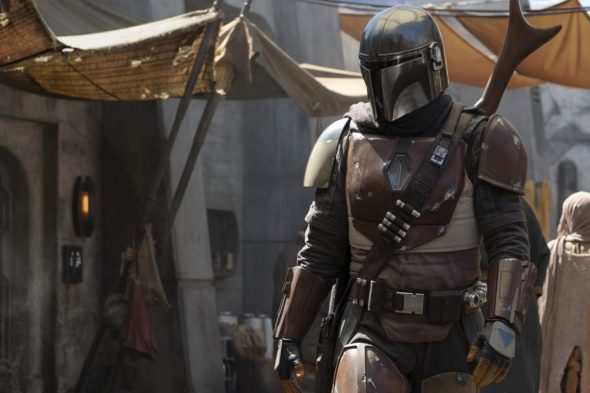 Can the first live-action Star Wars series live up to fan expectations? Has The Mandalorian TV show been cancelled or renewed for a second season on Disney+? The television vulture is watching all the latest cancellation and renewal news, so this page is the place to track the status of The Mandalorian, season two. Bookmark it, or subscribe for the latest updates. Remember, the television vulture is watching your shows. Are you?

Streaming on the Disney+ paid subscription service, The Mandalorian is an action series set in the Star Wars universe. It stars Pedro Pascal with Gina Carano, Giancarlo Esposito, Carl Weathers, Omid Abtahi, Werner Herzog, Taika Waititi, and Nick Nolte. Set five years after the fall of the Empire and before the emergence of the First Order, the series follows the travails of a lone gunfighter — bounty hunter Dyn Jarren (Pascal), aka The Mandalorian — in the outer reaches of the galaxy, far from the authority of the New Republic.

There’s no need to wonder if Disney+ will cancel or renew The Mandalorian for season two. The series was renewed for a second season before the series debut. Subscribe for free alerts on The Mandalorian cancellation or renewal news.

What do you think? Are you glad that The Mandalorian TV show has been renewed for a second season? How would you feel if Disney+ had cancelled this TV series, instead?

i am happy that it has already been renewed, i saw that this one women thought that the show was sexist and it made me worry because I know if you take any side with that argument you’ll always be made into the bad guy just so that the person can make a point about how they feel about sexism