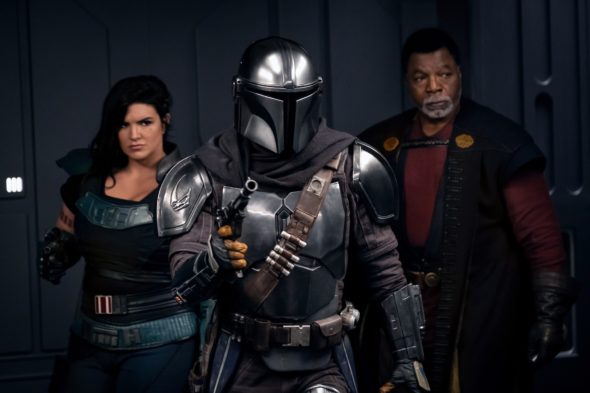 Can the Child be kept safe? Has The Mandalorian TV show been cancelled or renewed for a third season on Disney+? The television vulture is watching all the latest cancellation and renewal news, so this page is the place to track the status of The Mandalorian, season three. Bookmark it, or subscribe for the latest updates. Remember, the television vulture is watching your shows. Are you?

Streaming on the Disney+ subscription service, The Mandalorian stars Pedro Pascal with Gina Carano, Carl Weathers, and Giancarlo Esposito. Set in the Star Wars universe, five years after the fall of the Empire and before the emergence of the First Order, the series follows the travails of a lone gunfighter — bounty hunter Dyn Jarren (Pascal), aka The Mandalorian. He operates in the outer reaches of the galaxy, far from the authority of the New Republic. In the second season, The Mandalorian and the Child continue their journey, facing enemies and rallying allies as they make their way through a dangerous galaxy in the tumultuous era.

Unless they decide to publicize viewership, it would typically be difficult to predict whether Disney+ will cancel or renew The Mandalorian for season three. The series is connected to the very popular Star Wars franchise so, I have no doubt that it will be renewed. I’ll keep my ears open and an eye out for news, and will update this page with breaking developments. Subscribe for free alerts on The Mandalorian cancellation or renewal news.

12/12/20 update: The Mandalorian has been renewed for a third season.

What do you think? Are you glad The Mandalorian TV show has been renewed for a third season? How would you feel if Disney+ cancelled this TV series, instead?

Yep suppose to announcing soon I can’t wait until new season next year winter I heard which sticks.

Of course we must have more seasons with The Mandalorian , pretty please ❤️

It had better be renewed into season 3 and beyond, with multiple spin off series moving forward. This is the future and hope for Star Wars after the abysmal theatrical releases within the last few decades (other than Rogue One, loved that film).

All great movies so happy made on Disney plus the mandorian continue many more seasons got renewed season 3 too on the work wait another year how it goes nowadays.

I hope and pray that the show will return for the new season.

Relax there would still be marvel

Hoping another season renewed love it. Why is every a Friday new episode air on Disney Plus Like all episodes together instead watch one episode a week.