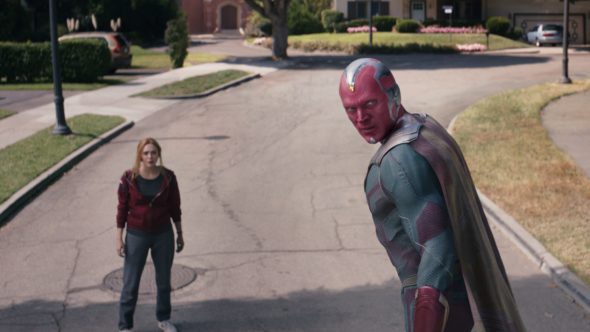 The first season of the WandaVision TV show has come to a close and it’s been a wild ride. Despite the title of the action-packed and emotional ninth episode (“The Series Finale”), could this popular Disney+ series return for a second season?

The WandaVision superhero series is set in the Marvel Cinematic Universe (MCU) and takes place after the events of the Avengers: Endgame feature film. It stars Elizabeth Olsen, Paul Bettany, Kathryn Hahn, Teyonah Parris, Kat Dennings, and Randall Park. The story revolves around Wanda Maximoff (Olsen) aka Scarlet Witch, who can harness magic and telekinesis, and Vision (Bettany), her android companion. As the TV show begins, the two super-powered beings are living the ideal suburban life in the town of Westview while trying to conceal their powers. As they begin to enter new decades and encounter various television tropes, the couple begins to suspect that things are not as they seem.

While it seemed clear that there would be just one season of the series, WandaVision head writer Jac Schaeffer was cagey in January when talking about a possible future. “I cannot talk about second season. That really fits in with the Marvel philosophy,” said Schaeffer. “[Marvel Boss Kevin Feige] is so great at coming out and being like, ‘Here’s what’s happening!’ to a point. ‘Here’s the field, and this is where the field drops off.’ A second season is not something that can be discussed that’s on the field quite yet.”

She would say that “It was always the design with these shows that they feel like a run of a comic. In that way, it feels very complete. It’s an emotional completion I stand by and feel great about and always was very much baked in.”

Last month, at the Television Critics Association press tour, Feige shared that there were no plans for a second season of WandaVision. The series will lead directly into the MCU feature film, Doctor Strange in the Multiverse of Madness. The 2022 movie is expected to star Olsen (as Wanda), Benedict Cumberbatch, Benedict Wong, Rachel McAdams, Chiwetel Ejiofor, and Xochitl Gomez.

Fiege conceded that a second season of the Disney+ series could happen at some point. He noted, “I’ve been at Marvel too long to say a definite ‘No’ to anything as far as a second season of WandaVision.” Fiege added, “The fun of the MCU is all of the crossovers we can do between series and films. So, it will vary based on the story. Sometimes a story will go into a season two, sometimes it will go into a feature and back into a series. Sometimes, and yet to be announced, we’re thinking of and planning second seasons for some of the upcoming series.”

The show’s director, Matt Shakman, knows a thing or two about classic TV tropes, having been a child actor on half-hour shows like Just the Ten of Us, Diff’rent Strokes, Webster, and Growing Pains. Of a possible second season of WandaVision, he echoed Fiege’s statement and said, “I love working at Marvel. It’s the best place in the world. They’re so great with filmmakers and I’ve had such a great journey with this show. We have no plans for WandaVision season two at all — that could change, of course. It all depends on what’s the story. We were very focused on telling this story over nine episodes and hopefully coming to a conclusion that feels satisfying and also surprising.”

What do you think? Did you enjoy the WandaVision TV show? Did it come to a satisfying conclusion for you? Would you like to see the characters return to a series at some point?

all 3 shows were disappointing. too much politics, not enough depth and entertainment

Please cancel it worst show ever not funny no action don’t care for it?