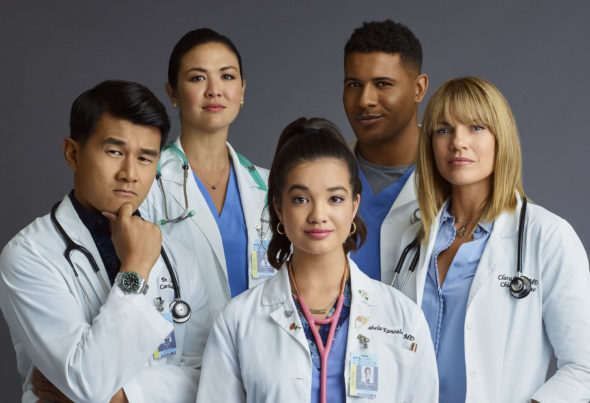 Can a physician still find time to be a regular teen? Has the Doogie Kamealoha, MD TV show been cancelled or renewed for a second season on Disney+? The television vulture is watching all the latest cancellation and renewal news, so this page is the place to track the status of Doogie Kamealoha, MD, season two. Bookmark it, or subscribe for the latest updates. Remember, the television vulture is watching your shows. Are you?

Streaming on the Disney+ subscription service, the Doogie Kamealoha, M.D. TV show is inspired by the 1989-93 Doogie Howser, M.D. series. The reboot stars Peyton Elizabeth Lee, Kathleen Rose Perkins, Jason Scott Lee, Matthew Sato, Wes Tian, Emma Meisel, Mapuana Makia, and Jeffrey Bowyer-Chapman with Alex Aiono and Ronny Chieng in recurring roles. Set in modern-day Hawai’i, the story follows Lahela “Doogie” Kamealoha (Peyton Elizabeth Lee), a 16-year-old prodigy who juggles a budding medical career with life as a teenager. With the support of her caring and comical ‘ohana (family) and friends, Lahela is determined to make the most of her teenage years and forge her own path.

It is difficult to predict whether Disney+ will cancel or renew Doogie Kamealoha, MD for season two unless they decide to publicize viewership. Since Disney+ isn’t ad-supported, it can take a chance on series it believes in, but sooner or later, it comes down to production costs versus viewership numbers. This show is based on an existing property and fits well with the Disney brand, so I’m leaning toward a renewal. I’ll keep my ears open and an eye out for news and update this page with breaking developments. Subscribe for free alerts on Doogie Kamealoha, MD cancellation or renewal news.

2/4/22 update: Doogie Kamealoha, MD has been renewed for a second season.

What do you think? Are you glad that the Doogie Kamealoha, MD TV show has been renewed for a second season? How would you feel if Disney+ had cancelled this TV series instead?

This has a fresh i take on Young Adults . Fantastic show . Should keep going . Hate to NOT see season 2 . Please don’t cancel

I enjoyed watching this show! Please keep it going!,,