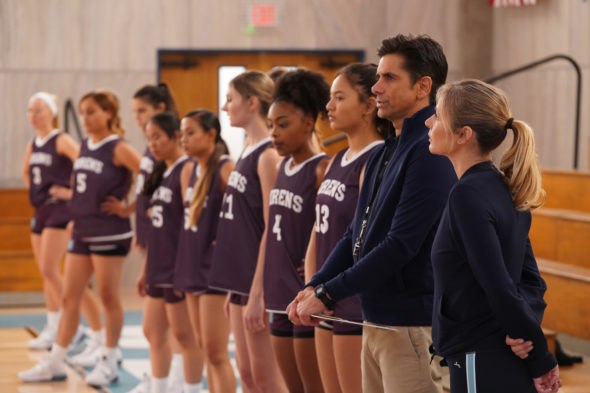 Is this show a slam dunk for a renewal? Has the Big Shot TV show been cancelled or renewed for a second season on Disney+? The television vulture is watching all the latest cancellation and renewal news, so this page is the place to track the status of Big Shot, season two. Bookmark it, or subscribe for the latest updates. Remember, the television vulture is watching your shows. Are you?

Streaming on the Disney+ subscription service, the Big Shot TV show stars John Stamos, Jessalyn Gilsig, Richard Robichaux, Sophia Mitri Schloss, Nell Verlaque, Tiana Le, Monique Green, Tisha Custodio, Cricket Wampler, and Yvette Nicole Brown. After getting ousted from the NCAA, men’s basketball coach Marvyn Korn (Stamos) is given a chance for redemption with a coaching position at an elite private high school, Westbrook School for Girls. Korn soon learns that the teenage players require empathy and vulnerability — foreign concepts for this stoic coach. By learning how to connect with his players, Korn starts to grow into the person he’s always hoped to be.

Unless they decide to publicize viewership, it is difficult to predict whether Disney+ will cancel or renew Big Shot for season two. Since Disney+ isn’t ad-supported, it can take a chance on TV series that it believes in but, sooner or later, it comes down to production costs, versus viewership numbers. Offhand, I suspect it will be renewed. Stamos fits well with the House of Mouse’s brand but Disney+ hasn’t really made it evident what kind of show this is. I wonder if many will think this is a light comedy and not return. I’ll keep my ears open and an eye out for news and will update this page with breaking developments. Subscribe for free alerts on Big Shot cancellation or renewal news.

9/3/21 update: Big Shot has been renewed for a second season.

What do you think? Are you glad that the Big Shot TV show has been renewed for a second season? How would you feel if Disney+ had cancelled this TV series, instead?

I love Hot Shot. It is good, clean show and yet it tackles all sorts of problems that are relevant to our society. The acting is very good. Bring on a second season and will certainly watch!!!

Big Shot SHOULD definitely be renewed. The BEST family, yet all around BEST series to come out in a long time. I rate it 10 along w/This is Us! Unique & refreshing concept. John Stamos is delightfully endearing & the supporting cast each is appealingly excellent.

I love the show! It’s different then the usual Disney shows. A lot of interest for the entire family I want to see a season 2!

This is a quality family show dealing with real issues in very entertaining and positive way. I am a 56 year old male who watches basically zero TV and this series captivated me. Each episode has put a smile on my face and brought a tear to my eye. It has appeal for kids, dad’s, mom’s, sports fans, coaches, educators and more.
I really hope it gets more seasons.

I loved Big Shots! I hope there is a second season coming.

I really enjoyed all 9 sessions. I am anxiously awaiting the next series. Please do not cancel Hot Shots.

Love this series! Want to see the team go to D2!

There are several Disney shows that I have been watching. Big Shot and Sweet Tooth are among the top. I hope that Disney renews it’s shows instead of cancelling them like they did with Jupiter’s Legacy.

Big Shot is my favorite show. This is John’s best work ever! I like all the problems the writers made.

Love this show definitely want to see a season 2

I hope it will be renewed, lots of interesting characters and plots unfinished.

They need to get to D2 in the show, finish it strong disney

Great show. Has a lot of heart.Also funny and moving. A rare combination Should be renewed in

Please renewed another season so good love it and enjoy it. Look forward every episode come on Disney+ always entertainment.