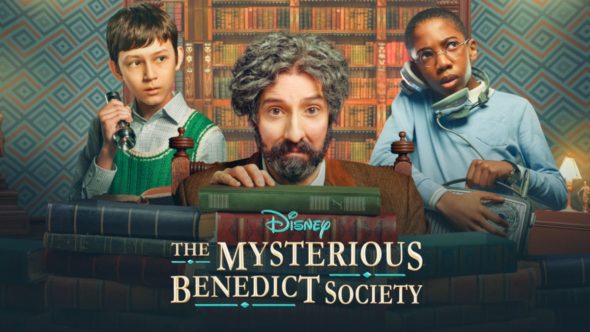 Which twin can truly be trusted? Has The Mysterious Benedict Society TV show been cancelled or renewed for a second season on Disney+? The television vulture is watching all the latest cancellation and renewal news, so this page is the place to track the status of The Mysterious Benedict Society, season two. Bookmark it, or subscribe for the latest updates. Remember, the television vulture is watching your shows. Are you?

Unless they decide to publicize viewership, it is difficult to predict whether Disney+ will cancel or renew The Mysterious Benedict Society for season two. Since Disney+ isn’t ad-supported, it can take a chance on series it believes in, but sooner or later it comes down to production costs, versus viewership numbers. This show seems like a perfect fit for the Disney brand so, unless viewership is really low, I think this series will be renewed. I’ll keep my ears open and an eye out for news, and will update this page with breaking developments. Subscribe for free alerts on The Mysterious Benedict Society cancellation or renewal news.

9/29/21 update: The Mysterious Benedict Society has been renewed by Disney+ for a second season.

What do you think? Are you glad that The Mysterious Benedict Society TV show has been renewed for a second season? How would you feel if Disney+ had cancelled this TV series, instead?

Please, please, please renew The Mysterious Benedict Society on Disney+!! We loved it! Tony Hale was fantastic and “Constance” was hysterical! We are reading the other books in the series now. We need great series like this!!

I wish they had more advertising for this show….most people don’t even know about it. Those I’ve recommended to watch absolutely love it. Its brilliant and I really hope there is a season 2….but please more advertising to keep the viewership up because I’m hoping for seasons 3 and 4!

Please keep the series!! It’s the reason I’ve got Disney and Love the show with my kids and grandkids! It’s such Wonderful family time And learning for us All!!

My wife and are in our late 60’s and love the series. We originally got Disney plus for our grandson and decided to keep it due to programing such as this. If you renew the series so will we. Thank you.

Love this show! Multi generations watching together. We hope it is renewed – bring on season 2

Me, my 8-year-old son, my husband & my in-laws all LOVE this show! It is the first show that our entire family including Grandma and Grandpa ages 8 to 65 all adore and can watch together. We will be DEVASTATED if Disney cancels the series and really hope & look forward to Season 2 and subsequent seasons!
#RENEWMYSTERIOUSB

My 11 year old twins love it; so does my DD daughter and I love it too… one of the only shows we watch as a family that everyone loves! Gets them thinking…

My kids are obsessed with this show. They say they will sue Disney+ if it is discontinued so they are warned.

I hope they renew it but they should atleast provide some resolution aand not leave viewers hanging.

If They cancel The Mysterious Benedict Society They’re fools! I would be very disappointed. It’s The only reason I’m keeping Disney+.

Our whole family loves the show, as well as the book series it is based upon. Definitely hoping for more!