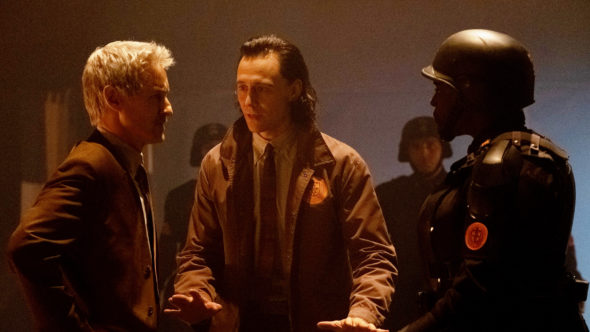 Can this show live up to expectations? Has the Loki TV show been cancelled or renewed for a second season on Disney+? The television vulture is watching all the latest cancellation and renewal news, so this page is the place to track the status of Loki, season two. Bookmark it, or subscribe for the latest updates. Remember, the television vulture is watching your shows. Are you?

Streaming on the Disney+ subscription service, the Loki stars Tom Hiddleston, Owen Wilson, Gugu Mbatha-Raw, Sophia Di Martino, Wunmi Mosaku, and Richard E. Grant. The TV show revolves around Thor’s adopted brother and the god of mischief from the Marvel superhero feature films. After stealing the Tesseract (again) during the events of the Avengers: Endgame movie, an alternate version of Loki (Hiddleston) finds himself called before the mysterious Time Variance Authority (TVA). Forced to answer for his crimes against the timeline, they give Loki a choice: face being erased from existence due to being a “time variant” or, help fix the timeline and stop an even greater threat. Loki ends up trapped in his own crime thriller, traveling through time and altering human history.

Unless they decide to publicize viewership, it is difficult to predict whether Disney+ will cancel or renew Loki for season two. Since Disney+ isn’t ad-supported, it can take a chance on series it believes in but, sooner or later it comes down to production costs, versus viewership numbers. That being said, there has been a lot of anticipation for this series and Hiddleston’s character is beloved by many Marvel fans. How could it not be a hit? Word is that season two is already in development so, I think that Loki will be renewed. I’ll keep my ears open and an eye out for news, and will update this page with breaking developments. Subscribe for free alerts on Loki cancellation or renewal news.

What do you think? Are you glad that the Loki TV show has been renewed for a second season? How would you feel if Disney+ had cancelled this TV series, instead?

We loved it! Can’t wait to see next episode!