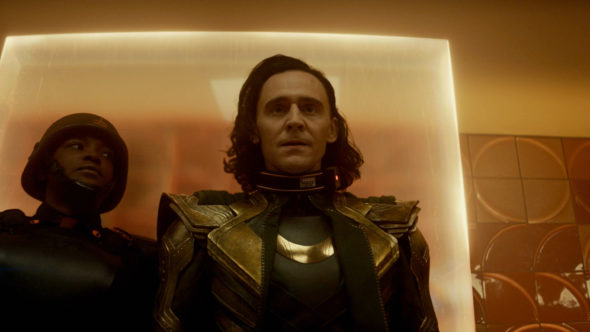 Can this version of Loki survive the first season of the Loki TV show on Disney+? As we all know, the Nielsen ratings typically play a big role in determining whether a TV show like Loki is cancelled or renewed for season two. Disney+ and other streaming platforms, however, collect their own data. If you’ve been watching this TV series, we’d love to know how you feel about the first season episodes of Loki here.  *Status Update Below.

A Disney+ science-fiction crime thriller series, the Loki stars Tom Hiddleston, Owen Wilson, Gugu Mbatha-Raw, Sophia Di Martino, Wunmi Mosaku, and Richard E. Grant. The TV show revolves around Thor’s adopted brother and the god of mischief from the Marvel superhero feature films. After stealing the Tesseract (again) during the events of the Avengers: Endgame movie, an alternate version of Loki (Hiddleston) finds himself called before the mysterious Time Variance Authority (TVA). Forced to answer for his crimes against the timeline, they give Loki a choice: face being erased from existence due to being a “time variant” or, help fix the timeline and stop an even greater threat. Loki ends up trapped in his own crime thriller, traveling through time and altering human history.

What do you think? Which season one episodes of the Loki TV series do you rate as wonderful, terrible, or somewhere between? Do you think that Loki on Disney+ should be cancelled or renewed for a second season? Don’t forget to vote, and share your thoughts, below.