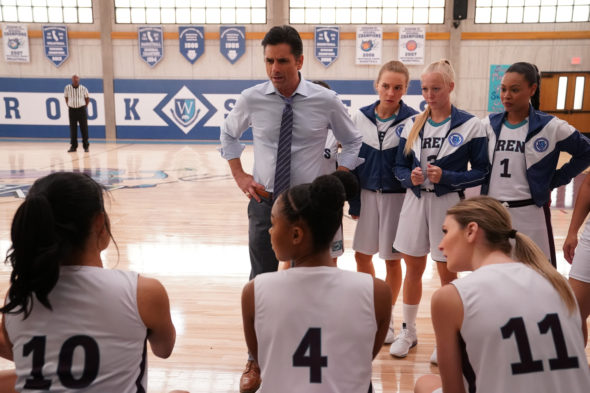 How will this coach and his players change one another in the first season of the Big Shot TV show on Disney+? As we all know, the Nielsen ratings typically play a big role in determining whether a TV show like Big Shot is cancelled or renewed for season two. Disney+ and other streaming platforms, however, collect their own data. If you’ve been watching this TV series, we’d love to know how you feel about the first season episodes of Big Shot here.  *Status Update Below.

A Disney+ sports dramedy series, the Big Shot TV show stars John Stamos, Jessalyn Gilsig, Richard Robichaux, Sophia Mitri Schloss, Nell Verlaque, Tiana Le, Monique Green, Tisha Custodio, Cricket Wampler, and Yvette Nicole Brown. After getting ousted from the NCAA, men’s basketball coach Marvyn Korn (Stamos) is given a chance for redemption with a coaching position at an elite private high school, Westbrook School for Girls. Korn soon learns that the teenage players require empathy and vulnerability — foreign concepts for this stoic coach. By learning how to connect with his players, Korn starts to grow into the person he’s always hoped to be.

What do you think? Which season one episodes of the Big Shot TV series do you rate as wonderful, terrible, or somewhere between? Do you think that Big Shot on Disney+ should be cancelled or renewed for a second season? Don’t forget to vote, and share your thoughts, below.

Please renewed another season look forward new episodes of it I can’t wait for new season next year.

So glad got renewed another season so good love full house John Stamos enjoy it look forward binge watching it.

Please renew Big shots for a season 2!!!! Love this show

I think this was an incredible show I think they definitely should renew it for a season 2 I would love to watch the girls make it to D1!! Or even all the way to college I believe we could get a great season 8 maybe 10 seasons out of this show!!

Love to see The big shot be renewed for a 2nd season. Also love to see coach Marvyn have a love story with Assist Coach Holly I love the chemistry they have gather on the screen Let’s cross finger they will do a secound season