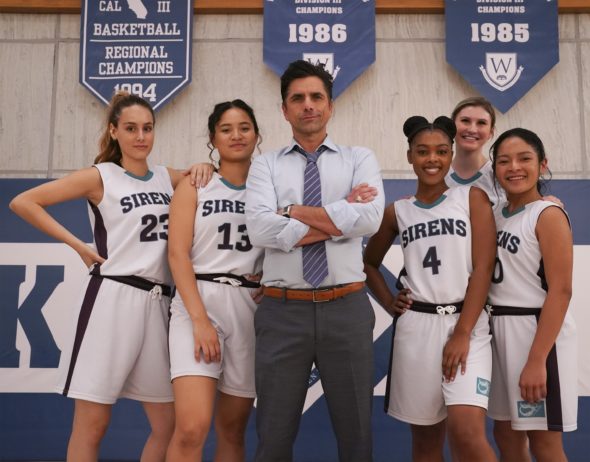 It’s time for a rematch for Coach Korn and his team on Disney+. The streaming service has renewed the Big Shot TV series for a second season.

A sports dramedy series, the Big Shot TV show stars John Stamos, Jessalyn Gilsig, Richard Robichaux, Sophia Mitri Schloss, Nell Verlaque, Tiana Le, Monique Green, Tisha Custodio, Cricket Wampler, and Yvette Nicole Brown. After getting ousted from the NCAA, men’s basketball coach Marvyn Korn (Stamos) is given a chance for redemption with a coaching position at an elite private high school, Westbrook School for Girls. Korn soon learns that the teenage players require empathy and vulnerability — foreign concepts for this stoic coach. By learning how to connect with his players, Korn starts to grow into the person he’s always hoped to be.

The 10 episodes of the first season were released from mid-April until mid-June 2021. Here’s the second season renewal announcement:

“We are thrilled to be returning with Big Shot. The show has touched so many hearts -John Stamos’ brilliance especially as Coach Marvyn Korn- we look forward to season two and beyond,” said co-creator and executive producer David E. Kelley.

“This show represents everything Disney is to me – family, inclusion, and unity. But at its core, @BigShotSeries is about guts and heart, and that is what Disney + demonstrated by giving us a second season. I am sending lots of love to the critics and fans that got up on their feet and cheered for us from the sidelines. I’m so grateful to continue to play Coach Korn, a man who learns to let go of pre-conceived judgements and learns from an incredible group of women, helping him to evolve and grow. And yet, he still has so much more to learn… thankfully he’ll get that chance in season two. #grateful,” said John Stamos.

“Big Shot” centers around Marvyn Korn (Stamos) after he is ousted from his position as head coach for an NCAA basketball team. He is given a chance at redemption with a coaching position at Westbrook, an elite private high school for girls and soon learns that the teenage players require empathy and vulnerability – foreign concepts for the stoic Coach Korn. By learning to connect with his players and his daughter, Marvyn starts to grow into the person he’s always hoped to be. The girls learn to take themselves more seriously, finding their footing both on and off the court.

About ABC Signature
One of the Disney Television Studios, ABC Signature is a global leader in the development, production and distribution of entertainment content across broadcast, cable and streaming platforms. The studio produces many of ABC Entertainment’s most significant hits, including “Grey’s Anatomy,” “Station 19” and “black-ish”; and co-productions “The Good Doctor,” “A Million Little Things,” “The Rookie,” “Home Economics” and late-night talk show “Jimmy Kimmel Live!” ABC Signature’s returning and upcoming series include “Godfather of Harlem” for EPIX; Hulu’s “Dollface,” and co-production “Woke; “grown-ish” for Freeform; and “The Wilds” for Amazon. The Studio produced “Little Fires Everywhere” for Hulu, which generated more hours of viewing during its original run than any other Hulu drama series – past or present. For streaming service Disney +, series include “The Mighty Ducks” and “Big Shot.”

Check out our status sheets to track new TV series pickups, renewals, and cancellations. You can find lists of cancelled shows here.
What do you think? Have you enjoyed the first season of the Big Shot TV show? Are you looking forward to season two on Disney+?