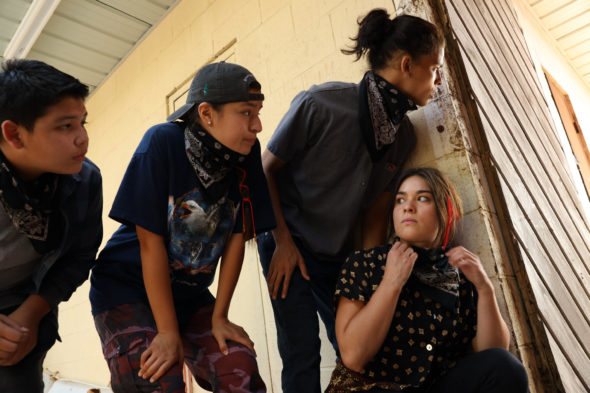 The gang still has time to reach their dream. Reservation Dogs has been renewed for a second season on FX on Hulu.  The show debuted on August 9th and the eight-episode season will conclude on September 20th.

Season One Continues This Monday Night with New Episode “Hunting”

LOS ANGELES, September 2, 2021 – FX’s hit comedy Reservation Dogs, which continues to gain critical acclaim and fans in its first season, has been renewed for a second season, it was announced today by Nick Grad, President, Original Programming, FX. The second season of Reservation Dogs is expected to premiere in 2022, exclusively on FX on Hulu.

“We couldn’t wait to share Reservation Dogs with viewers and are thrilled that they seem to love it as much as we do. We’re happy to put in an early order for another season,” said Grad. “Sterlin Harjo delivered on his creative vision, partnering with Taika Waititi and the rest of the creative team, the brilliant cast and crew to create one of TV’s best new comedies and a groundbreaking showcase of representation and raw talent.”

The first season of Reservation Dogs currently enjoys a 100% Certified Fresh ratings on Rotten Tomatoes and has earned Universal Acclaim on Metacritic.

Season one continues on FX on Hulu on Monday, September 6 with episode six, “Hunting”: Willie Jack and Leon go hunting. Written and Directed by Sterlin Harjo. The season one finale is slated for September 20.

The first season of Reservation Dogs has enjoyed strong critical praise, including:

“You can’t resist the charms of Reservation Dogs” The Atlantic (August 12, 2021)

“Shout-out to my favorite show of the moment: Reservation Dogs… .The cast is phenomenal… and the writing is exceptionally funny… .I implore you to check it out. You’ll thank me” CNN (August 15, 2021)

“What really stands out in Reservation Dogs is a location you’ve never seen before on TV and an astonishing cast of young newcomers… .The slang and language and cultural touchstones are as specific and real as the lived-in, indie-film aesthetic… .A distinctive, wonderfully cast triumph of representation” The Hollywood Reporter (August 4, 2021)

“One of the freshest and funniest things I’ve seen all year” Paste Magazine (August 20, 2021)

“Reservation Dogs is a revolutionary hangout comedy you really must watch… .some of the most unique, enjoyable, and artistically satisfying television available to watch” Thrillist (August 27, 2021)

“It’s rare to see a series that conjures up a sense of place quite as well as does FX’s new Reservation Dogs… .Reservation Dogs is a lovely, eminently watchable triumph” Variety (July 29, 2021)

From Co-Creators and Executive Producers Sterlin Harjo and Taika Waititi, Reservation Dogs is a half-hour comedy that follows the exploits of four Indigenous teenagers in rural Oklahoma who steal, rob and save in order to get to the exotic, mysterious and faraway land of California.

Starring D’Pharaoh Woon-A-Tai, Devery Jacobs, Paulina Alexis and Lane Factor, Reservation Dogs is filmed on location in Okmulgee, Oklahoma. A breakthrough in Indigenous representation on television both in front of and behind the camera, every writer, director and series regular on the show is Indigenous. This first-of-its-kind creative team tells a story that resonates with them and their lived experiences – and invites audiences into a surprisingly familiar and funny world.

About FX
FX is home to acclaimed and award-winning television available on the FX on Hulu streaming hub, the FX, FXX and FXM cable networks, and the video on-demand service FXNOW. FX on Hulu offers next day access to FX and FXX current series, FX’s library of legacy series, and exclusive original programming, including Devs, Mrs. America, A Teacher, American Horror Stories, Reservation Dogs and the upcoming Y: The Last Man, The Old Man, Fleishman is in Trouble, Class of ’09 and Under the Banner of Heaven. FX additionally features the drama series Mayans M.C., Pose, Snowfall and Taboo; the limited series American Horror Story, American Crime Story, Fargo, FEUD, Black Narcissus and the upcoming Pistol and Shōgun; the comedies Archer, Atlanta, Better Things, Breeders, DAVE, It’s Always Sunny in Philadelphia, What We Do in the Shadows and the upcoming Little Demon; the half-hour series Mr Inbetween, The Choe Show and The Premise; the weekly short-form comedy programming showcase Cake; and a growing slate of docuseries and documentary features, including The New York Times Presents, The Most Dangerous Animal of All, AKA Jane Roe, A Wilderness of Error, Hip Hop Uncovered; Hysterical, PRIDE and the upcoming Welcome to Wrexham. FX is the former home of The Shield, Nip/Tuck, Rescue Me, Damages, Sons of Anarchy, Justified and The Americans. FX’s library of acquired box-office hit movies is unmatched by any ad-supported television network, with FXM featuring classic films, contemporary hits, award-winning features and short-form original programming. FXX is also the cable home to The Simpsons, the longest-running comedy in TV history. Over the past decade, FX has received 385 Emmy(R) Award nominations and won 68 Emmys. FX has earned the most Emmy(R) Award nominations of any ad-supported cable brand for 10 consecutive years.

Check out our status sheets to track new TV series pickups, renewals, and cancellations. You can find lists of cancelled shows here.
What do you think? Have you watched the Reservation Dogs TV show? Are you looking forward to seeing season two on FX on Hulu?

Best new show on TV in years. My favorite character so far? The Lakota warrior ancestor who appears to Bear every time he gets knocked out unconscious.

Love this show, nice to have something different to watch. Funny yet a story line.