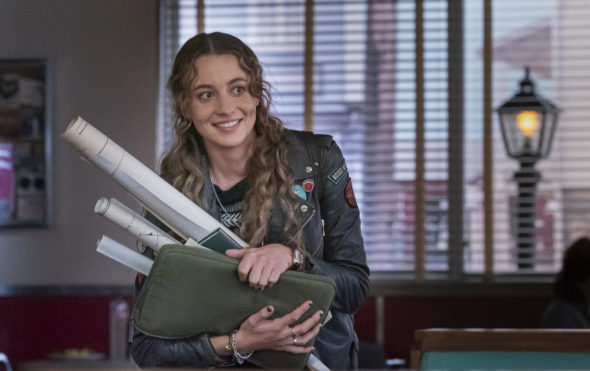 The problems of the people of Greylock are over. The CW has cancelled The Republic of Sarah so there won’t be a second season.

A drama series, The Republic of Sarah TV show was created by Jeffrey Paul King and stars Stella Baker, Luke Mitchell, Hope Lauren, Nia Holloway, Ian Duff, Forrest Goodluck, Landry Bender, Izabella Alvarez, and Megan Follows. The story begins as Greylock, New Hampshire is upended when a large quantity of coltan, a valuable metal, is discovered under the town. A state-backed mining company swoops in with plans to extract the mineral which will wipe Greylock off the map. With her loved ones in danger of losing their homes, rebellious high school teacher Sarah Cooper (Baker) vows to stop the bulldozers. There seems to be no way to stop the town’s impending demise until Sarah proposes an oddly intriguing solution: Greylock could declare independence since the town’s land was never properly claimed by the United States. With the help of Sarah’s supporters, they win the vote. Now, Sarah and her allies must confront an even more daunting task: building a country from scratch.

Airing on Monday nights, the first season of The Republic of Sarah averages a 0.05 rating in the 18-49 demographic and 326,000 viewers in the live+same day ratings (including DVR playback through 3:00 AM). While these numbers don’t include further delayed or streaming viewing, they are a very good indicator of how a show is performing, especially when compared to others on the same channel.

The drama debuted in June and the 13th and final episode will air next Monday, June 6th. Creator Jeffrey Paul King revealed that the series had been cancelled via social media.

Check out our CW status sheet to track the smallest network’s new series pickups, renewals, and cancellations. You can find lists of cancelled shows here.
What do you think? Have you watched The Republic of Sarah TV series? Are you sorry to hear that this CW show won’t have a second season?

Someone needs to pick up this fantastic show.

I’m sad that they cancelled this great show. I thought it had a good cast and one of the more unique premises out there. Just when I thought CW was to be celebrated for trying out different show profiles and rewarding them with time to develop them they go and disappoint me, like Freeform and Motherland: Fort Salem. Redeem yourself, CW. Fix it!

Sad that Republic of Sarah was canceled. It is a really good show with a unique premise. Some of the side issues were a bit soap opera-ish. Wish it had had time to develop the main storylines .

Would LOVE if Netflix would continue making this show!!!

I liked the show it is different from all the other shows that are on. Another good show canceled. I will be sad to see it gone.

Good, watched the first episode and couldn’t bring myself to watch another. SJW’s need to stop trying to write TV Series.

The show had a unique premise but they wasted it with too much airtime given to side issues, like the redheaded chick being obsessed with Sarah’s brother & her husband turning into a revenge obsessed douchebag as a result. Yeah, standard fare for most other TV shows, but it does nothing to advance the plot of “what happens when a small town in middle of nowhere New Hampshire seceded from the USA to become its own really tiny country”. Still think it’s premature to pull the plug on it after one short season though. Hell only knows that CW has… Read more »

Love the show another good show cancelled RENEW it

I loved this show! Don’t take it off the air. Bring it back next summer when there is nothing good on. I look forward every Monday night to this show only to find out this Monday will be the last, such a shame. I guess problem solving does not rank high on the list compare to shoot him up and beat them down. I’m going to miss this show and each of the characters for they all grew on me. It had such potential for growth and it was just getting started. From a fellow New Hampshire born and raise… Read more »

I loved this show! It was so refreshing compared to half of the shows on TV today. I am so sorry to hear this news.