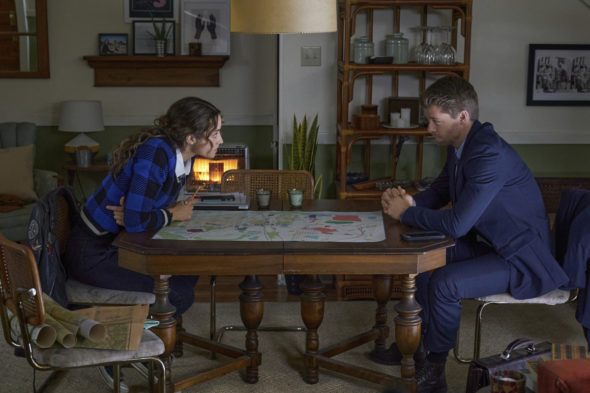 Does a town that becomes its own country need its own military? Has The Republic of Sarah TV show been cancelled or renewed for a second season on The CW? The television vulture is watching all the latest cancellation and renewal news, so this page is the place to track the status of The Republic of Sarah, season two. Bookmark it, or subscribe for the latest updates. Remember, the television vulture is watching your shows. Are you?

Airing on The CW television network, The Republic of Sarah TV show was created by Jeffrey Paul King and stars Stella Baker, Luke Mitchell, Hope Lauren, Nia Holloway, Ian Duff, Forrest Goodluck, Landry Bender, Izabella Alvarez, and Megan Follows. The story begins as Greylock, New Hampshire is upended when a large quantity of coltan, a valuable metal, is discovered under the town. A state-backed mining company swoops in with plans to extract the mineral which will wipe Greylock off the map. With her loved ones in danger of losing their homes, rebellious high school teacher Sarah Cooper (Baker) vows to stop the bulldozers. There seems to be no way to stop the town’s impending demise until Sarah proposes an oddly intriguing solution: Greylock could declare independence since the town’s land was never properly claimed by the United States. With the help of Sarah’s supporters, they win the vote. Now, Sarah and her allies must confront an even more daunting task: building a country from scratch.

The first season of The Republic of Sarah averaged a 0.05 rating in the 18-49 demographic and 323,000 viewers in the live+same day ratings (including DVR playback through 3:00 AM). While these numbers don’t include further delayed or streaming viewing, they are a very good indicator of how a show is performing, especially when compared to others on the same channel. Other economic factors can be involved in a show’s fate, but the higher-rated series are typically renewed and the lower-rated ones are cancelled. Find out how The Republic of Sarah stacks up against other CW TV shows.

Will The CW cancel or renew The Republic of Sarah for season two? The network’s been renewing most of its shows each year and is now programming seven nights a week. The CW has a lot of time on the schedule to fill so, I think there’s a very good chance that this show will be renewed. I’ll update this page with breaking developments. Subscribe for free alerts on The Republic of Sarah cancellation or renewal news.

9/3/21 update: The Republic of Sarah has been cancelled by The CW after one season.

What do you think? Were you hoping that The Republic of Sarah TV show would be renewed for a second season? Are you sorry that The CW cancelled this TV series, instead?

CW is always canceling they never stick to any series that are great and deserve to go on.

Oh I loved The Repubic of Sarah plz keep it on…. can’t wait for season 2, and season after that

I’m terribly disappointed that this series was canceled !! There’s so many shows of poor quality and this was one I genuinely looked forward to each week and felt the cast did quality performances. CW has made a judgment error in my opinion in that programming decision. I will no longer choose CW to support.

This delightful series needs to be renewed.

We’re liking what we’ve seen so far .. so please keep it going!!