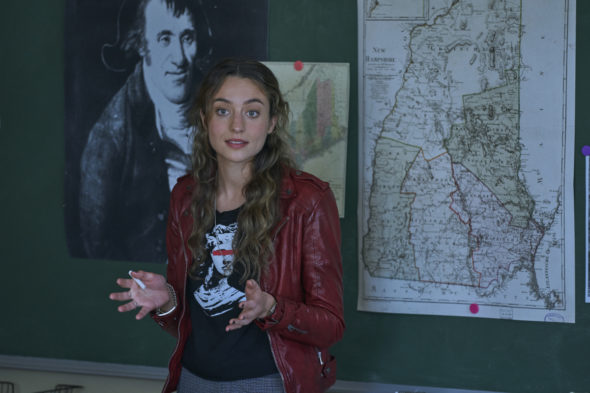 The story begins as the bucolic tranquility of Greylock, New Hampshire is upended. A massive vein of coltan — an incredibly valuable mineral used in tech — is discovered under the town. State-backed mining company Lydon Industries swoops in with plans to extract the mineral, which will wipe the town of Greylock off the map.

With her friends and family in danger of losing their homes, rebellious high school teacher Sarah Cooper (Baker) vows to stop Lydon’s bulldozers.

Leading Lydon’s efforts is Sarah’s estranged brother, Danny Cooper (Mitchell). After enduring a difficult childhood at the hands of his mother, former New Hampshire state senator Ellen Cooper (Follows), Danny is eager to exact his revenge on a community he feels abandoned him.

There seems to be no way to stop the town’s impending demise until Sarah proposes an oddly intriguing solution. Greylock could declare independence since the town’s land was never properly claimed by the United States.

With the help of Sarah’s supporters, they win the vote. Now, Sarah and her allies must confront an even more daunting task: building a country from scratch.

Series Finale:
Episode #13 — The Last Rabbit
Sarah is offered the chance for Greylock to receive international recognition, but at a great personal cost and turns to Grover for support. Bella (Landry Bender) is thriving in politics and tries to convince her dad to make it permanent. Danny offers to help Corinne with her legal problems, but Corinne asks for something he wasn’t expecting. Meanwhile, Tyler sees that AJ is struggling and offers to help. In return, AJ gives him a gift that supports his newfound passion.
First aired: August 6, 2021.

What do you think? Do you like The Republic of Sarah TV show? Do you think it should have been cancelled or renewed for a second season?

Loved this show. Very different premise. Not the same old cop, medical, fire drama. Needs to be renewed and given a chance to get to a wider audience.