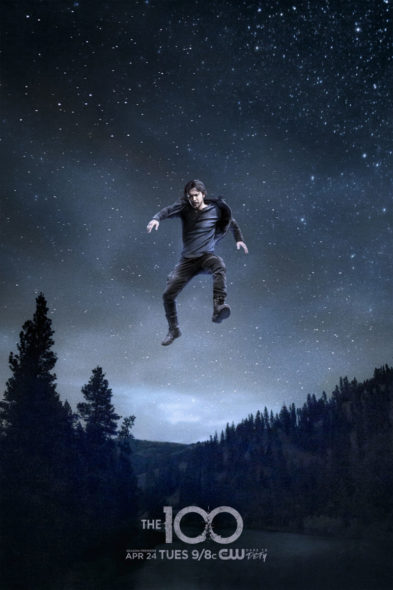 Humankind will live to fight another day. The CW has renewed The 100 TV show for a sixth season, with a start date TBD. The CW has not yet issued a press release about The 100 season six renewal, but the series’ writers have confirmed it on their official Twitter account.

A sci-fi drama action drama on The CW television network, The 100 stars Eliza Taylor, Paige Turco, Bob Morley, Marie Avgeropoulos, Lindsey Morgan, Christopher Larkin, Henry Ian Cusick, and Tasya Teles. The story centers on a post-apocalyptic group of survivors, who believe their people are all that is left of mankind. When they return to Earth, they realize they aren’t the only ones.

The 100 Renewed for a Sixth Season on The CW

With only two weeks under its belt, the fifth season of The 100 is averaging a 0.35 rating in the 18-49 demographic and 1.23 million viewers. Compared to season four, that’s up by about 3% and more than 28%, respectively. Right now, The 100 ranks eighth among the 15 scripted CW TV shows, when sorted by either measure.

As of yet, there has been no word on whether iZombie is cancelled or renewed for season five.

What do you think? Are you still enjoying The 100 TV series? Did you think The CW would cancel or renew it for a sixth season? Sound off, in the comments.

YAAAAAAY!!!!!! SUPER happy to hear there will be a season 6 of The 100, my current favourite show! This has really picked up in later seasons, I liked it from the beginning, I just love it more now!!!(most of us are probably glued to our screens to see when will Clarke and Bellamy get it on mind lol) I cried thru the final part of season 5, so sad to see Monty go but I guess alot can happen in 125years lol… I hope they will make at least another 6 seasons of this show PLEASE!!! and god bless Amazon… Read more »

Why? The only good thing about this season is that Clarky is out of the way & mostly & out of the limelight now that Octavia is the shrew of the room, other than that its just conceptually empty.

Good news. Congratulations to the Real Fans. I’m just a fan, but I’m glad it is coming back.

Definetly will watch as long as there is no more utopia rubbish.Love this show

I-zombie is so superior to Dynasty. Each week, Liv takes on a new character and does it brilliantly. The 100 has matured from a teen show to an amazing science fiction show with a masterful world and amazing cultural and social issues. These two shows have to stay on the air.