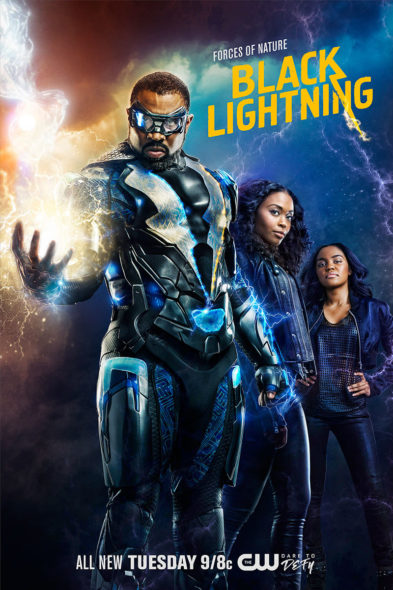 It’s electrifying! The CW has renewed its Black Lightning TV show for a second season. The superhero series is based on the DC Comics of the same name from Tony Isabella.

Black Lightning: A Look at the Ratings

The first season of Black Lightning is averaging a 0.59 rating in the 18-49 demographic and 1.78 million viewers. When you check out Black Lightning‘s rankings among the scripted CW TV shows, it’s clear the renewal didn’t come out of the blue.

What do you think Have you been watching DC’s Black Lightning TV series? Did you expect it to be cancelled or renewed for season two on The CW?

BLACK LIGHTNING, GOOD START TO THE SHOW.!! HOPE YOU HAVE CROSS OVERS WITH THE FLASH & AND ARROW.?? ETC.

Yo I wasn’t expecting much from this show , I’m a huge superhero geek and Black lightning is one of the best superheroe show out there. It’s different the heroes are cool as hell . and Black lightning kills it every time . Love how the story developed can’t wait for season 2

Love the entire cast especially China Anne Mclain and James (Harry James) Remar. Have seen olde James for many a year. Did I forget to mention that I love the programme? Glad to see it was renude

I kind of fell off of this show because I feel like it’s more interested in being a social commentary than it is in being a superhero show. Not that it can’t do both, but for me personally my main draw in watching anything having to do with superheroes is to see superheroes being just that. And given that it’s the freshman season of the show, I’d like to know more about how BL got his powers and less of his daughter coming into her own as a hero. It’s too soon to take focus off of the main protagonist.… Read more »

God forbid a black superhero that’s female. I agree a bit about the social commentary but they could show how he got his power and his daughters.

Dia, don’t start that mess with me. If a show is called Black Lightning and that’s who the protagonist is, that’s who they should focusing on, especially when the show is NEW. And I’m black also and love women, so don’t even with that.

No what a bad news.

The Professional
Reply to  Sam

I just wanted to say that I just watched the whole season in 2 days and cannot WAIT for the next one. I thought every aspect of the show was informative, although a little exaggerated it dramatic at time, but it is a show. My favorite was the bond of the family. Amazing writing and soundtrack. Would LOVE to be a first star to meet the cast! Great job y’all!