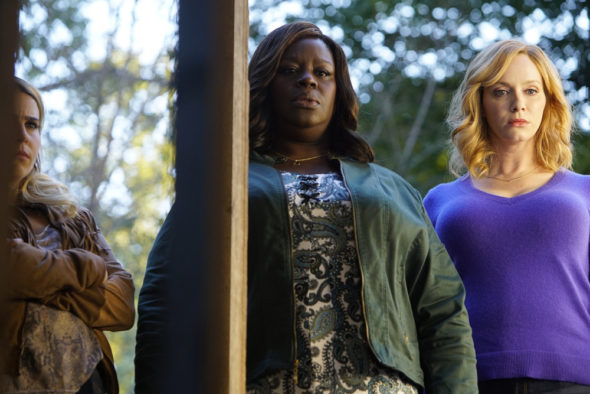 Do Ruby, Annie, and Beth steal your heart during the first season of the Good Girls TV show on NBC? As we all know, the Nielsen ratings typically play a big role in determining whether a TV show like Good Girls is cancelled or renewed for season two. Unfortunately, most of us do not live in Nielsen households. Because many viewers feel frustration when their viewing habits and opinions aren’t considered, we’d like to offer you the chance to rate all of the Good Girls season one episodes here.

A dark NBC comedy-drama, Good Girls stars Christina Hendricks, Retta, Mae Whitman, Matthew Lillard, Reno Wilson, Manny Montana, Lidya Jewett, Izzy Stannard, and David Hornsby. This action centers on Ruby (Retta), Annie (Whitman), and Beth (Hendricks) — three suburban mothers who have been struggling to get by. After a series of setbacks leaves them desperate, they decide to hold up the local Fine & Frugal supermarket, but their take far exceeds their expectations. Soon, they’re in deep with the local crime boss, Rio (Montana), and these “good girls” find themselves with an array of bad choices.

What do you think? Which season one episodes of the Good Girls TV series do you rate as wonderful, terrible, or somewhere between? Should NBC cancel or renew Good Girls for a second season? Don’t forget to vote, and share your thoughts, below.

What’date dose it start up again

I was totally impressed by the first season. I got “addicted” just after the first episode. I adore Christina H…been a fan since Mad Men. Anyone that doesn’t give her credit for her acting chops is just plain silly. YES…she is a goddess of physical beauty and built the way a woman is supposed to be…curvy, voluptuous and “soft” looking, NOT like an emaciated, bony, sunken, hollow creature with the physique of a young teen boy that hasn’t “sprouted” yet. I’m a woman, and we are tougher critics of other women than men. I appreciate it when a woman looks… Read more »

I love the cast, the acting, the character development, but I hate that I ne of the few shows I enjoy watching, celebrates criminal acts. Please don’t cancel Code Black!

Good Girls is nice to watch, but it isn’t my favorite. I hope you keep it, but you seem to be killing off a dozen of my other favorite TV shows. I may have to stop watching TV altogether. Then how much revenue will you get from ads? End reality TV. It is crud.

OMG this show is TOOOOO Funny. Great individual story lines (except the stereotypical mexican bad guy sitch (again writers fault here peeps) but this is one of my favs. We DVR everything and Good girls is the first to watch for the week!

I love this show, the lines are hilarious and the cast works great together. Very excited it’s back for another season!

I literally jumped for joy when I heard Good Girls got renewed! I rarely watch shows the night they air if it’s 8:00 or later but I recorded every episode and watched them the the second I woke up.

Good Girls is well acted, fun, clever, and addictive. You want to know what these girls are going to do next. Great show!

Thank u. Keep it going. Love it