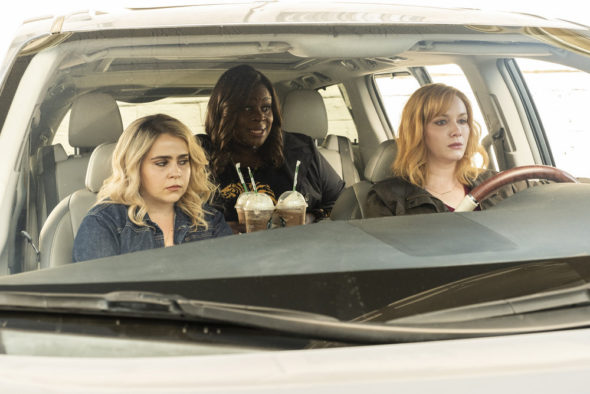 How good is the second season of the Good Girls TV show on NBC? As we all know, the Nielsen ratings typically play a big role in determining whether a TV show like Good Girls is cancelled or renewed for season three. Unfortunately, most of us do not live in Nielsen households. Because many viewers feel frustration when their viewing habits and opinions aren’t considered, we’d like to offer you the chance to rate all of the Good Girls season two episodes here. *Status update below.

A dark NBC comedy-drama, Good Girls stars Christina Hendricks, Retta, Mae Whitman, Matthew Lillard, Reno Wilson, Manny Montana, Lidya Jewett, and Izzy Stannard. The TV series centers on three suburban mothers who have been struggling to get by. After a series of setbacks, they hold up the local Fine & Frugal supermarket, but their take far exceeds their expectations. Soon, they’re in deep with the local crime boss, and these “good girls” find themselves with an array of bad choices. In season two, the women have to deal with the fallout of their criminality.

What do you think? Which season two episodes of the Good Girls TV series do you rate as wonderful, terrible, or somewhere between? Should NBC cancel or renew Good Girls for a third season? Don’t forget to vote, and share your thoughts, below.

Please keep “Good Girls” coming back! This is such a refreshing! ❤️❤️❤️❤️❤️

Good Girls is smart, funny and realistic in how people can get caught up in situations. Enjoy watching, can’t wait for season 3

I absolutely love this show! It is the best! I watch them again online just to see what I might have missed the first time around.

I did NOT like that Beth shot HIM. The agent is a big creepy loser. If he dies, I might stop watching and it was so funny when it started!

I would rate the show Good Girls better than average. I will admit some epusodes are better that others. Some episodes make me laugh out loud. The one about the gluten in the cupcakes was hysterical. Exceptional writing. I love all 3 girls. How did the shows creators pick such creative actors.

Love this show! Its hilarious how these girls keep getting in and out of trouble with hot “gang friend”! Love Mae, she’s my fave! Please renew!!

I love this show. I truly root for the girls to win on all levels. They really are good girls. I am a huge fan. Keep this party going!

I love this show! Please don’t cancel. It’s one of my all time favorites!

This is a must watch show @ my house! Love all the characters & what a great & different storyline. Hope it stays on for years to come.

This is a great show! Renew it!

Also love this show. It is different.