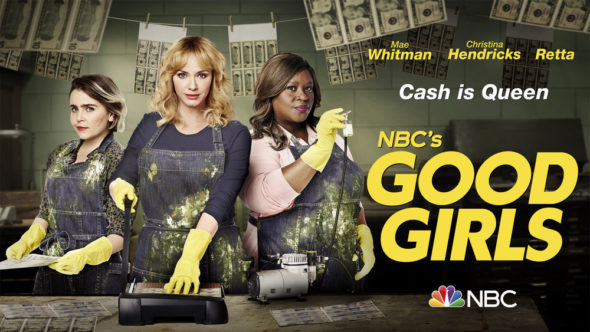 While it’s never been a big success in the ratings for NBC, Good Girls has continued to be renewed each year. Will the numbers rise or fall even lower this year? Will Good Girls be cancelled or renewed for season four? Stay tuned. *Status update below.

A dark comedy-drama, Good Girls stars Christina Hendricks, Retta, Mae Whitman, Reno Wilson, Manny Montana, Lidya Jewett, Isaiah Stannard, and Matthew Lillard. The TV series centers on three suburban moms who’ve struggled to get by. They hold up the local Fine & Frugal supermarket, but their take far exceeds their expectations and find themselves in deep trouble with the local crime boss. In season three, the ladies each take on seemingly innocent jobs but each has a special purpose to aid them in their new criminal enterprise.

For comparisons: Season two of Good Girls on NBC averaged a 0.55 rating in the 18-49 demographic and 2.32 million viewers.

What do you think? Do you like the Good Girls TV series on NBC? Should it be cancelled or renewed for a fourth season?

This show started out so new & clever. Now it’s gotten strange & very weird. Please get new writers so we can all stay with what was a really interesting program. And the youngest woman is so trashy & pathetic now… and what’s with her daughter/son? I feel sorriest for the former cop….