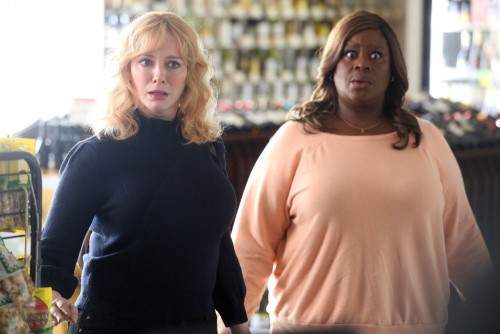 The Good Girls drama series centers on three suburban moms who’ve struggled to get by. They hold up the local Fine & Frugal supermarket, but their take far exceeds their expectations and find themselves in deep trouble with the local crime boss. The cast includes Christina Hendricks, Retta, Mae Whitman, Reno Wilson, Manny Montana, Lidya Jewett, Isaiah Stannard, and Matthew Lillard.

The third season of Good Girls averaged a 0.42 rating in the 18-49 demographic and 1.84 million viewers. Compared to season two, that’s down by 20% in the demo and down by 18% in viewership.

The show’s traditional ratings have never been very good and have declined each year but, the non-linear ratings are seemingly enough to keep getting the series renewed.

Here’s the fourth season press release from NBC, as well as a video of the cast receiving the good news:

NBC has renewed its hit drama “Good Girls” for a fourth season.

· “Good Girls” has averaged a 0.9 rating in adults 18-49 and 3.4 million viewers overall in “live plus seven day” Nielsens, with the show’s Feb. 16 season premiere growing to a 3.3 rating in 18-49 and 7.8 million viewers with digital and linear viewing recorded to date.

· The show derives 58% of its 35-day 18-49 rating from digital sources and has seen its digital 18-49 viewership grow this season versus last by 50%, making it NBC’s #2 show this season on digital platforms.

What do you think? Do you watch Good Girls? Will you watch season four of this series on NBC?

I love this show. I can only hope there will be a season5!!

My husband and I love this show. So happy it’s renewed. And we are seniors and really enjoy it.

I love this show, full of fun and suspense. Thanks for renewing. will be staying tuned in for return date

I am hooked on the show!! Please continue with the series. I will definitely watch!!

This was a right decision to keep Good Girls on. I’m excited and can’t wait.

I am don’t know thrilled that Good Girls has been renewed! The cast is fabulous and the writing is excellent. I can’t wait to see the new season!!!!!!!Congratulations everyone associated with the show!

Thank you for getting it back for another season… I love this show !☺

Thank goodness…. I love this show!

Love this show, so glad it’s coming back!

I guess the renewal makes sense to somebody. Not to me, though.

I’ve been getting killed with cancellations this season. Finally got one to fall my way. Awesome news!