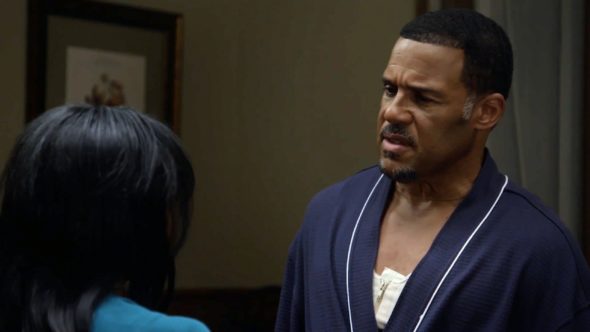 An OWN drama series, The Haves and the Have Nots stars John Schneider, Tika Sumpter, Angela Robinson, Renee Lawless, Crystal Fox, Peter Parros, Tyler Lepley, Gavin Houston, and Aaron O’Connell. The drama centers on the complicated dynamic between the Cryer, Harrington, and Young families of Savannah, Georgia. In season eight of this series from Tyler Perry, Judge Cryer (Schneider) and his rich friends are all finding out what happens when personal flaws go unchecked. Karma has not been kind to the elite one-percenters.

I love the show there needs to be more… Should not be canceled….love love love…… can’t stop watching

This is the second Tyler Perry produced show that ended with too many loose ends. It is totally unfair to expect viewers to get involved with years of watching only to have the show stopped without attempting to at least give a final close out to the main characters!! I don’t know whether I would want to trust getting involved in watching any further of his produced shows. I was extremely disappointed with the final episode of “The Haves and The Have Nots”.

I love this show, and I know if allowed to continue, it can be one of the best shows ever! Please don’t end this show.

I have been watching “The Haves and Have Nots” since Day 1. I am heartbroken that the show will be cancelled!!!! Why??? It is EXCELLENT!!!! Please leave it on… what will I do???

Please don’t take away the have and Have nots, This is the only african american soap opera we have. We lost Greenleaf, If loving you wrong. Your rating would be high, If you set up the shows to are each nites 7 day a week. Give us somthing to look at every nite.

I started watching the Haves and the Have Nots on Hulu. Once U started watching I couldn’t stop. It’s that good. Then I told other people and they got addicted to the show. I was upset when I noticed that after season 7 episode 10 they no longer had it on Hulu. So I tried on demand and there it was. I know that just because you don’t see people watching on OWN it doesn’t mean that people aren’t watching. Some people are in contracts and plan on Subscribing to it when their contract runs out. So long story short… Read more »

OWN was once the go to channel With “If Loving You Is Wrong” “ Queen Sugar” “ Green Leaf”” Ambition”and “ The Have Nots” are leaving “ WHY” can OWN Let Viewers understand the “ Let Down Especially after paying cable companies for the Channel. Will More TV Series Like Those be back. and How soon.

I have enjoyed this show from the very beginning. I have campaign for this show with my family, now I have them watching and they love the show just as much as I do. ” In the words of Tyler Perry the show keeps getting Gooder and Gooder” You have already taking from us For Loving You Is Wrong please dont take HNHN.

You must have some interest since you watch the show!
I like it!
Love Veronica! Candace too!

The show does have some bad acting, bit I see that as part of the wildly entertaining stories! While many stories are WAY over the top (which explains the bad acting) I do find it refreshing that the show still manages to keep my interest each week.

Please, please, please, do not cancel the show. I have never missed a show since the beginning. Why are you canceling it, are the Actors tired? You canceled “if loving you is wrong” another favorite of mind, now this one too…GOD FORBID