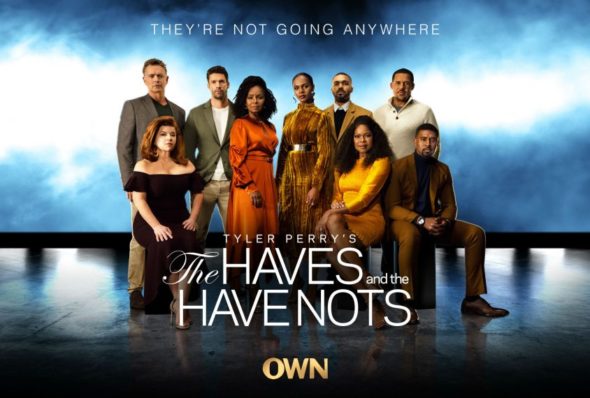 An OWN soap opera crime thriller, The Haves and the Have Nots stars John Schneider, Tika Sumpter, Angela Robinson, Renee Lawless, Crystal Fox, Peter Parros, Tyler Lepley, Gavin Houston, and Aaron O’Connell. The drama centers on the complicated dynamic between the Cryer, Harrington, and Young families of Savannah, Georgia. Season seven brings in even more havoc than ever before with revenge, heartbreak, betrayal, death, and destruction touching the lives of every character.

For comparisons: Season six of The Haves and the Have Nots on OWN averaged a 0.31 rating in the 18-49 demographic and 1.63 million viewers.

What do you think? Do you like The Haves and the Have Nots TV series on OWN? Should it have been cancelled instead of renewed for an eighth season?

*10/28/20 update: The Haves and the Have Nots has been renewed for an eighth season.

My mom and I make it a date night every Tuesday night. We absolutely love love “The Haves and the Have Nots.”

I am hooked and have binged watched and finally caught up and done with season 7! Please put season 8 in soon!!

This soap opera is 100percent interesting and real.

Love this show an hope doesn’t get canceled

Love the haves and the have nots. Waiting 4 season 8 yes looking forward to new seasons

The Haves and the Have Nots is one of the best acted shows on TV and is intelligently stimulating but Season Seven seemed a throw away. Yes, interesting things happened, but Season Six beat it hands down. Seeing Wyatt was sad, but it seemed almost inevitiable and even though Katherine gave all her money to Hanna, but Hanna(best actress ever) will spend every dime to get Katherine out. Veronica is in total control of her husband and son, Nobody came right out and took the breath away. Far too few apisodes. Not enough to cling to and now we are… Read more »

This show started out strong and now you have moments of extreme excitement and the absolute complete idiotic outcomes. Tyler is dragging storylines on and on to a point the actors are repeating themselves. A season is maybe 2 days shew! I tape the show now to fast forward through what I’ve already heard the week before

The Have and Have Nots is an incredible show and is another example of Mr Perry’s remarkable work! The acting is superb!! I as I’m sure all fans of this exciting show can’t wait to see what’s going to happen next!!