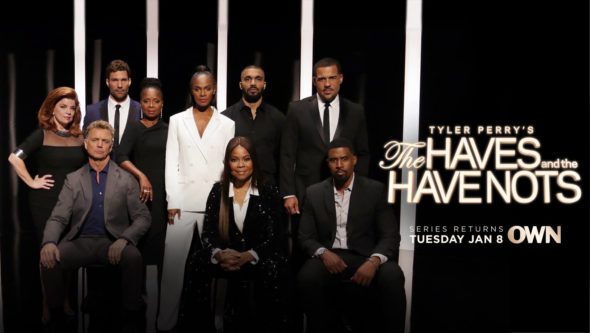 OWN TV series have a small, but fiercely loyal audience, and even with declining ratings, Tyler Perry’s The Haves and the Have Nots TV has remained at the top of the heap. Now that it is back for a sixth season, will the story wind to a close, or keep on keeping on? Will The Haves and Have Nots be cancelled or renewed for a seventh season? Stay tuned. *Status update below.

For comparisons: The fifth season of The Haves and the Have Nots on OWN averaged a 0.43 rating in the 18-49 demographic with 1.943 million viewers.

What do you think? Do you still like The Haves and the Have Nots TV series? Should it be cancelled or renewed for a seventh season?

I’m a loyal fan of both the Haves and the Have Nots- as well as Greenleaf; but my major complaint is the time span between the seasons. The wait is too long- five or six months between seasons, is dropping the viewer audience. Please re- evaluate the lapse between seasons. Have a blessed and prosperous New year. In Jesus name.

Everyone is waiting on this to come back on plus if loving you is wrong. I’m constantly looking for updates praying and hoping I see good news. I love it please bring them back for some more seasons!

Never Stop Playing, “ Haves and the Have Not’s”

I’m waiting when will have and have Nots returned I need closure, come on now Tyler!!!!

I want to see more of “the haves and the have nots”!!!

To be honest…. this show is all that!! I Freaking love this show.. and all the characters. I especially love the writer. He is from my home state. My husband and I watch this show faithfully…. we look forward to watching every new season of Have and the Have Nots… please don’t ever cancel this show…
We love you Tyler !!!

Please come back with a 7 season! It’s just getting good..I’m addicted to this show

Please do not cancel! If you need help writing a script-I’ll be glad to put in my $0.02! The ratings are not telling the truth-especially when it comes to how much the African American community loves it show! Keep hope alive!