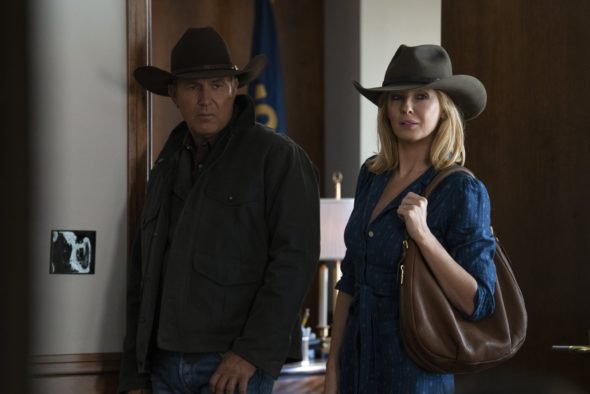 The saga of the Duttons will continue on Paramount Network. The Yellowstone TV show has been renewed for a fifth season. The fourth season finished airing on January 2nd but there’s no word yet on when season five will launch.

“Yellowstone’s record-breaking performance proves we’ve tapped a cultural nerve and unleashed a passionate audience from the center of the country to each of the coasts,” said Chris McCarthy, President and CEO, ViacomCBS Media Networks. “Kevin Costner leads our incredible cast who make the Duttons America’s favorite family and, this new season is sure to be another one fans won’t want to miss.”

“We are honored to be able to bring audiences another season of Yellowstone. The continued growth in viewership and the recent recognition from the guilds bolsters our commitment to continue to bring groundbreaking entertainment to audiences,” said executive producer David C. Glasser, 101 Studios.

The original drama series chronicles the Dutton family, led by John Dutton (Costner), who controls the largest contiguous cattle ranch in the United States. Amid shifting alliances, unsolved murders, open wounds, and hard-earned respect – the ranch is in constant conflict with those it borders – an expanding town, an Indian reservation, and America’s first national park.

Yellowstone also served as a launch pad for the new Paramount+ series Mayor of Kingstown and 1883, both of which are two of the top titles on the streaming service.

About 101 Studios:
101 Studios is a global entertainment company dedicated to the acquisition, financing, development, production and distribution of high-caliber, creator-driven storytelling. Founded by David Glasser, Chief Executive Officer, and David Hutkin, Chief Operating Officer, the studio empowers content creators through first-class collaboration and innovation. On the television side, 101 produces Taylor Sheridan’s Emmy nominated series Yellowstone, as well as Sheridan’s upcoming series Mayor of Kingstown and Yellowstone prequel 1883. Additionally, 101 Studios oversees and manages the newly formed Sports Illustrated Studios, a content platform based on the most compelling stories, characters and moments in sports past, present and future. Upcoming projects include Paradise Found based on the true story of high school football coach Rick Prinz; a docuseries about the sexual abuse and cover-up at Ohio State University, co-produced by George Clooney and Grant Heslov’s Smokehouse Pictures; and the docuseries Covers, a behind-the-scenes look at Sports Illustrated’s top cover stories of all time. SI Studios has also exclusively partnered with iHeartMedia to create and distribute original podcasts through the iHeartPodcast network. On the film side, past releases include The Current War: Director’s Cut, the Sundance Audience award winner Burden as well as the family comedy The War with Grandpa.

We've got some super sweet news: #YellowstoneTV season 5 is a go. See you back at the ranch! (Cookie: Sweethart Baking Experiment) pic.twitter.com/YL6hvdPAgQ

What do you think? Have you been keeping up with the Yellowstone TV series? Are you glad to hear that it’s been renewed for a fifth season on Paramount Network?

So glad that the show is going to go on. I love it. Only one thing, I wish 1883 was on the same channel. Instead of paying extra to watch on Parmount +. Adding more money to cable is to much, So I can’t watch 1883. I am sad about that.

By your question, I’m guessing that you might be watching the series on Peacock? If that’s the case, they got season 3 a few months after it finished airing, so I assume season 4 would be on a similar timetable. Probably will be on Peacock right around summertime. Which isn’t a bad thing, if everything else on TV is reruns, right?

Yes……renewal for Yellowstone. Just what I wanted to hear. Favorite show of mine.

Best drama great news I look forward forward to seeing it so good this year.