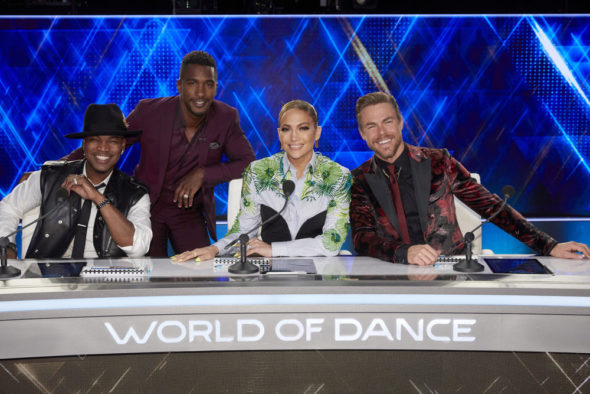 Who will win the big prize in the fourth season of the World of Dance TV show on NBC? As we all know, the Nielsen ratings typically play a big role in determining whether a TV show like World of Dance is cancelled or renewed for season five. Unfortunately, most of us do not live in Nielsen households. Because many viewers feel frustration when their viewing habits and opinions aren’t considered, we invite you to rate all of the fourth season episodes of World of Dance here.  *Status Update Below.

An NBC dance competition series, World of Dance is hosted by Scott Evans, with Jennifer Lopez, Derek Hough, and NE-YO judging the performances. The series showcases elite solo dancers, partners, and full dance crews compete against each other in multiple categories of dance, including hip-hop, tap, ballet, break dancing, ballroom dancing, and stomping. The winner(s) receive a life-altering grand prize of $1,000,000 and the title of best dancer in the world.

What do you think? Which season four episodes of the World of Dance TV series do you rate as wonderful, terrible, or somewhere between? Do you think that World of Dance should be cancelled or renewed for a fifth season on NBC? Don’t forget to vote, and share your thoughts, below.

This season is truly cringe worthy with all the pandering to the judges. I fast forward through all their carefully scripted “light hearted fun” to watch the dancers who are lackluster this year.