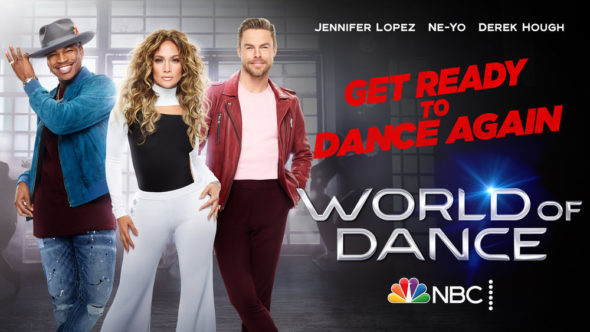 After some time away, World of Dance is back on Tuesday nights and has NBC’s top summer show, America’s Got Talent, as a lead-in. Will the ratings rise, stay the same, or fall? Will World of Dance be cancelled or renewed for season five? Stay tuned.  *Status Update Below.

A dance competition series, World of Dance is hosted by Scott Evans, with Jennifer Lopez, Derek Hough, and NE-YO judging the performances. The series showcases elite solo dancers, partners, and full dance crews compete against each other in multiple categories of dance, including hip-hop, tap, ballet, break dancing, ballroom dancing, and stomping. The winner(s) receive a life-altering grand prize of $1,000,000 and the title of best dancer in the world.

8/19 update: You can see the latest night’s ratings in context.

For comparisons: Season three of World of Dance on NBC averaged a 0.84 rating in the 18-49 demographic and 3.69 million viewers.

What do you think? Do you like the World of Dance TV series on NBC? Should it be cancelled or renewed for a fifth season?

There was one edition of World of dance in Poland. However, so far there have been 24 editions of Dancing with the stars (Taniec z gwiazdami). The king of this program is dancer Stefano Terrazzino- European Champion of Latino Show Dance. Stefano was in 12 editions of the Polish DWTS. He was 8 times in the final and won 4 times. This puts him in 3rd place in the world for the number of victories in this program. In fact, he should have won 8 times. Recently, he was in the final with a young actress and singer Julia Wieniawa.… Read more »