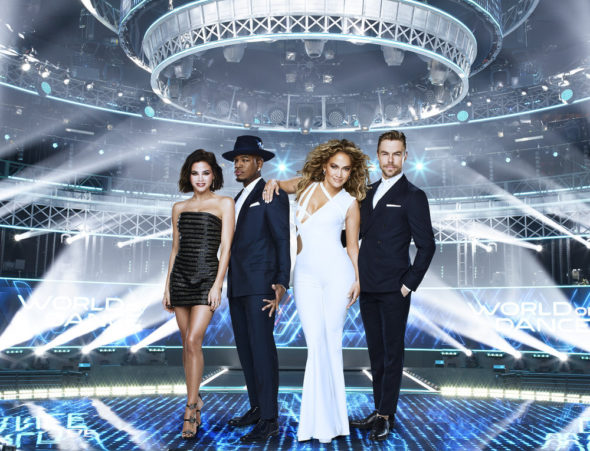 Is this the last dance? Has the World of Dance TV show been cancelled or renewed for a third season on NBC? The television vulture is watching all the latest cancellation and renewal news, so this page is the place to track the status of World of Dance, season three. Bookmark it, or subscribe for the latest updates. Remember, the television vulture is watching your shows. Are you?

An NBC dance competition series, World of Dance is hosted by Jenna Dewan, who also serves as a mentor to the dancers. Meanwhile, Jennifer Lopez, Derek Hough, and Ne-Yo judge the performances. The series showcases dancers competing for a grand prize of $1,000,000. Elite solo dancers, partners, and full dance crews compete against each other in multiple categories of dance, including hip-hop, tap, ballet, break dancing, ballroom dancing, and stomping.

The second season of World of Dance NBC averaged a 1.24 rating in the 18-49 demographic and 5.63 million viewers. Compared to season one, that’s down by 32% and 27%, respectively. Find out how World of Dance stacks up against other NBC TV shows.

Fans don’t have to spend the season worrying whether NBC will cancel or renew World of Dance for season three. The network ordered the third season a few weeks prior to the sophomore season premiere. Since even renewals can be cancelled though, I’ll keep a hungry on the ratings and update this page with breaking developments. Subscribe for World of Dance cancellation or renewal alerts.

What do you think? Are you happy World of Dance was renewed for a season three? How would you feel if NBC had cancelled this TV show, instead?

I have been starving to see a new episode of “World of Dance”! Please tell me that it hasn’t been cancelled! My husband and I love the diversity of competition. It often had us on the edge of our seats gasping in awe of such wonderful talent!

Yes. Very happy. Too many talented artist out there that have yet to be given acknowledgement. WOD is a platform for all dancers to shine

I absolutely love to watch world of dance. It is by far the best show I have chosen to watch. It not only shows all the types of dancing but provides a life message between the competitors. I can’t wait to see the next season to come!

I can’t wait until this show is cancelled. Horrible camera angles, useless cuts to the judges reactions inst instead of dancing. Not to mentioning super biased scoring. I shouldn’t know who the winner of the show is after 2 performances. Predetermined, not a competition but a showcase with fake judging.

shameonyouall I have never been so disgusted at the way this was Judged!!!! I cannot believe that the group selected can’t even dance like many of the others. I feel like this was just set up to happen this way. You already knew who you wanted to win. Because the other acts before the high school show could really dance. – ISN’T THIS THE WORLD OF DANCE!!!!!!! and not high school plays. Unbelievable. We are all mad here and have lost faith in your judging. Horrible – The world people!!!! Dance!!!!! I believe you planned this. Shame on you all!!!!!!!!!!!!!!!!!!!… Read more »