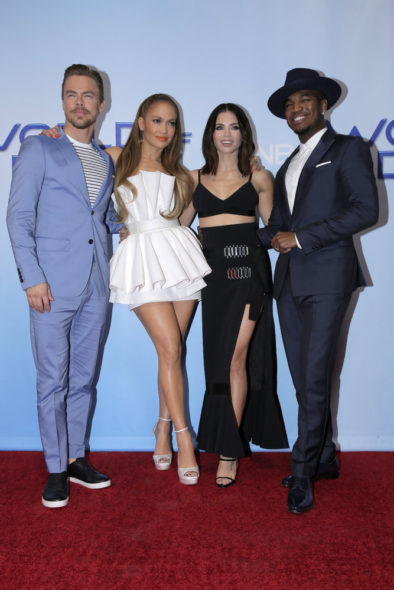 Dust off your dancing shoes. NBC has announced the second season premiere date for its World of Dance TV show. Season two debuts on Tuesday, May 29, 2018 at 10:00pm ET/PT, following the season 13 premiere of America’s Got Talent.

An NBC competitive reality TV series, World of Dance is hosted by Jenna Dewan Tatum, who also serves as a mentor. Jennifer Lopez, Derek Hough, and Ne-Yo judge the performances. The series showcases dancers competing for a grand prize of $1,000,000. Elite solo dancers, partners, and full dance crews compete against each other in multiple categories of dance, including hip-hop, tap, ballet, break dancing, ballroom dancing, and stomping.

Learn more about the World of Dance season two premiere from this NBC press release excerpt.

“World of Dance” gives dancers the platform to showcase their talents and compete for a life-altering grand prize of $1 million, led by a judging team of extraordinary dance superstars — Jennifer Lopez (who also serves as an executive producer), Derek Hough, NE-YO and host/mentor Jenna Dewan Tatum.

In its first season “World of Dance” averaged a 2.6 rating in 18-49 and 10.1 million viewers overall in “live plus seven day” Nielsens, making it last year’s #1 new summer show in both measures and the #2 summer show overall on broadcast television in both categories behind only “America’s Got Talent.” “World of Dance” was also the most-watched new summer alternative series on the broadcast networks in 10 years.

What do you think? Did you watch the first season of the World of Dance TV series? Do you think you’ll check out season two on NBC?

We won’t be watching. The only reason this show was renewed was because of Jennifer Lopez.