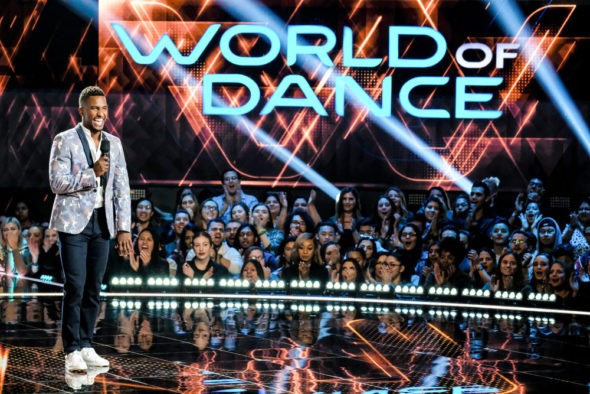 It takes two to tango and NBC wants to stay partners with the World of Dance TV show. The peacock network has renewed the series for a fourth season.

A dance competition series, World of Dance is hosted by Scott Evans, with Jennifer Lopez, Derek Hough, and Ne-Yo judging the performances. The series showcases dancers competing for a grand prize of $1,000,000. Elite solo dancers, partners, and full dance crews compete against each other in multiple categories of dance, including hip-hop, tap, ballet, break dancing, ballroom dancing, and stomping.

Airing on Sunday nights, the third season of World of Dance NBC averaged a 0.85 rating in the 18-49 demographic and 3.70 million viewers. Compared to season two, that’s down by 32% and 34%, respectively.

Looking at the rankings of NBC TV shows from 2018-19 season, World of Dance ranks eighth of 11 non-scripted shows. The series previously aired during the summer months and was one of NBC’s better performers.

What do you think? Do you like the World of Dance TV show? Will you be watching season four on NBC?

I love this show. Season four is definitely the best so far. The performances are off the charts with creative talent. Jen, Derek, and Ne -Yo are a perfect compliment that add humor and sweetness to the show.

When is World of Dance coming back???

World of dance is a perfect show i love it so much i cant wait until season 4 hits.

My sister and I absolutely love World of Dance and can’t wait for Season 4.

When is the first show to air, what date

I love World of Dance and can’t wait for it to return. I would love to see a competition with all previous champions. Now that would be a good show!☺️

World of Dance is the best. I look forward to seeing the competition from all over the world. I’m so happy that it is coming back for the 4th season…and hopefully many more seasons in the future. Not only is this show great for the dancing, the judges (which are top-notch) but it brings together a world that seems to be falling apart. It doesn’t matter where the contestants come from, there is a human bond that is so strong and held together in dance and music. Congratulations to all who are involved in the creation and production of WoD.… Read more »

This is my favorite show of all time! I absolutely love World of Dance! It’s amazing that any age and any type of dance is welcomed. I’m so glad it’s renewed for a fourth season and hope it continues for many more years to come. The judges are the best of any of the talent shows I’ve ever watched. Those three have a world of talent and can share their gifts with these performers. This is my favorite Sunday fun! Love WOD!

I love World of Dance. It’s just mesmerizing to watch some of the acts. Such talent! I love the judges also. Jennifer Lopez is so beautiful and the men are charming. It’s nice to watch people use their talents instead of every show is about murder, drugs and sex. It should be on for many many more seasons.

I love world of dance. I want to see it back. This show made my weeks worth flying by. Love jlo more than anything. Please don’t cancel.

World of Dance elevates TV. The talent and production value is exceptional! I’m sure it will be on the air for a long time. I’m a happy fan!

world of dance is a great show,it really inspires and it perfect tv in todays world non stop violence, sex and madness ,i hope it runs for many more seasons with its fun and amazing judges kudos to everyone on the show and behind the scenes teams p.s less scripting or what seems like it a lot more real and natural reactions .. and even higher scoring meter would be great,more levels and ..hope it lasts longer this upcoming season.