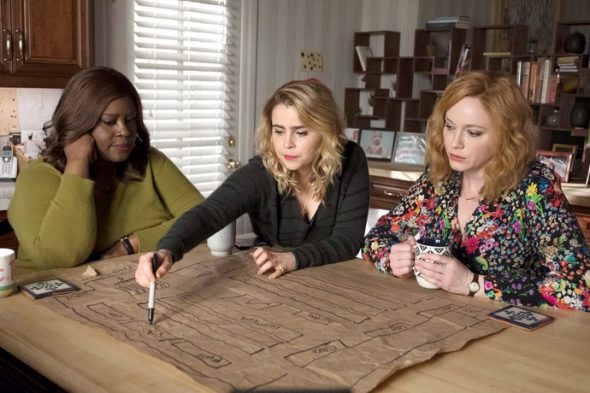 The 15th season finale of The Voice airs tonight but fans of the singing competition can already mark their calendars for the kick-off of season 16. In addition to The Voice, the peacock network has announced the return dates for World of Dance, Good Girls, and A.P. Bio.

Returning for its second year, comedy-drama Good Girls will debut on Sunday, March 3rd, at 10:00 PM. Comedy A.P. Bio, also back for a second season, will launch at 8:30 PM on Thursday, March 7th.

Heres some additional information from NBC:

· “The Voice” ranks this season as television’s #1 alternative series, with the Monday edition averaging a 2.1 rating in adults 18-49 and 10.7 million viewers overall in “live plus seven day” averages from Nielsen Media Research. Through the season’s opening 12 weeks, the Monday edition of “The Voice” is undefeated in its timeslot versus regular broadcast competition in the key 18-49 demographic.

“WORLD OF DANCE”- TUESDAY, FEB. 26 (9-11 P.M.); REGULAR TIMESLOT SUNDAY, MARCH 3 (8-10 P.M.)
· The third season of NBC’s hit dance competition series is led by a judging team of extraordinary dance superstars – Jennifer Lopez, Derek Hough, NE-YO and host Scott Evans. The series will give dancers the platform to showcase their talents and the opportunity to receive a life-altering grand prize of $1 million.

“GOOD GIRLS” – SUNDAY, MARCH 3 (10-11 P.M.)
· Season two is all about women dealing with the consequences of their criminal behavior. What happens in the wake of the trigger being pulled will have life-changing consequences that ripple through the entire season for Beth, Ruby and Annie.

· In its first season “Good Girls” averaged a 1.5 rating in adults 18-49 and 6.1 million viewers overall in “live plus seven day” ratings from Nielsen Media Research, to improve the time period by +15% versus NBC’s year-earlier results in 18-49. When viewership on linear and non-linear platforms up to 35 days was added, the “Good Girls” season average in 18-49 increased to a 2.2 rating in 18-49. “Good Girls” went undefeated in the timeslot in 18-49 versus CBS’ competing drama “Scorpion” and ABC’s competing rookie drama “The Crossing” (“live plus same day”).

“A.P. BIO” – THURSDAY, MARCH 7 (8:30-9 P.M.)
· After losing out on a chance to get out of Toledo and into his dream job at a prestigious university in Season 1, disgraced Harvard philosophy professor Jack Griffin (Glenn Howerton) remains determined to get out of town and regain prominence in the academic world. To do this, Jack decides to begin work on a book detailing a new philosophical thesis. This thesis will require him to immerse himself in Toledo more than ever before while continuing to enlist the help of his students and friends at Whitlock – including Principal Durbin (Patton Oswalt). Jack will also find himself intellectually challenged and charmed by a woman he meets in the last place he’d expect: the payroll department of Whitlock High.

What do you think? Are you looking forward to the returns of any or all of these NBC shows?

Love this show. Please leave it alone and don’t cancel.2

I LOVE A.P. Bio! I know it’s probably a love it or hate it kind of show. I just get it. It’s my kind of comedy.

I just knew it would be a matter of time before “The Voice” got cut back to one night per week. “American Idol” also cut back on its results show in its later years, and “Dancing with the Stars” got itself trimmed to airing only on Mondays after having its results show on Tuesdays. Those results shows really are a waste of scheduling for any network.

I can’t believe A.P. Bio is coming back. It’s the most mean-spirited show I’ve ever seen. The characters are uninteresting and the main character is hateful, to be blunt. I watched 3 episodes, hoping each time that the next one would be more “attractive”–HA! Awful, awful show…

nope all these show are boring but they had nerves to cancel the taken which was a 100% more interesting .exciting ..good action ..