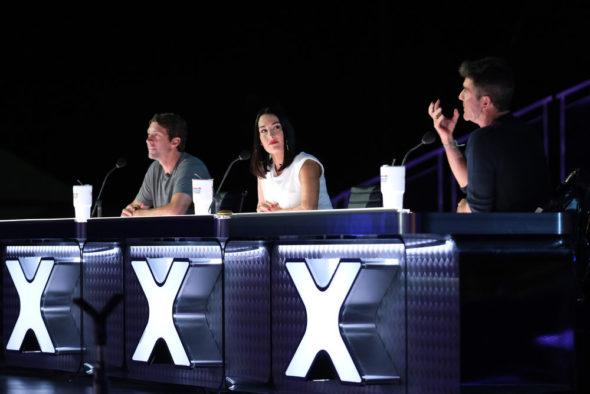 Can this competition series spin-off become a hit? Has the America’s Got Talent: Extreme TV show been cancelled or renewed for a second season on NBC? The television vulture is watching all the latest cancellation and renewal news, so this page is the place to track the status of America’s Got Talent: Extreme, season two. Bookmark it, or subscribe for the latest updates. Remember, the television vulture is watching your shows. Are you?

Airing on the NBC television network, the America’s Got Talent: Extreme TV show is a spin-off of the long-running America’s Got Talent series. The judges in the first season are series creator and executive producer Simon Cowell, professional motorsports competitor Travis Pastrana, and WWE wrestler Nikki Bella. AGT’s Terry Crews hosts. The franchise expands with this series which showcases outrageous, unique, and jaw-dropping acts too big to be confined to a theater stage. Acts include feats of gymnastics, heights, fire, vehicles and more. Single contestants or groups vie for a chance to win a $500,000 prize and the title of “AGT: Extreme” champion.

The first season of America’s Got Talent: Extreme averaged a 0.55 rating in the 18-49 demographic and 3.56 million viewers in the live+same day ratings (including DVR playback through 3:00 AM). While these numbers don’t include further delayed or streaming viewing, they are a very good indicator of how a show is performing, especially when compared to others on the same channel. There can be other economic factors involved in a show’s fate, but typically the higher-rated series are renewed and the lower-rated ones are cancelled. Find out how America’s Got Talent: Extreme stacks up against other NBC TV shows.

Will NBC cancel or renew America’s Got Talent: Extreme for season two? The original AGT series has been very successful for the network during the summer months and NBC needs a show to help fill the Monday night schedule now that The Voice is airing just one cycle a year. Based on the nature of the show, I have doubts that Extreme will be renewed for 2022-23 but could return at some point. I’ll update this page with breaking developments. Subscribe for free alerts on America’s Got Talent: Extreme cancellation or renewal news.

What do you think? Do you hope that the America’s Got Talent: Extreme TV show will be renewed for a second season? How would you feel if NBC cancelled this TV series, instead?

I was not impressed at all over the finalists. The handicapped one didn’t land right either time and the motorcycles weren’t impressive. When I was a kid, 55 years ago, there was a giant tube at the Skowhegan (Maine) Fair that had 5 motorcycles doing the same stuff. Old. Lame. Not special. Others on the show were hugely better.

John Goodman didn’t return to the show after his accident. He was hospitalized y 4 months in October but show resume filming January 5-13th so just over two months.

Not a fan of this program. Still like the original AGT but this one is a bit much.