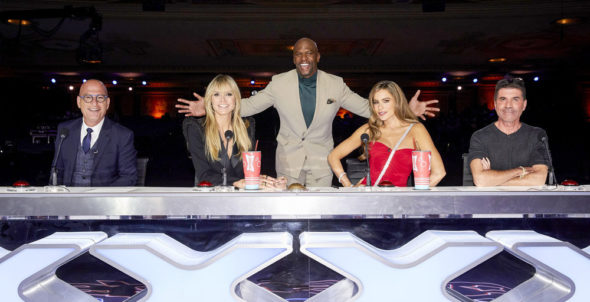 Who will get the coveted Golden Buzzer? Has the America’s Got Talent TV show been cancelled or renewed for a 17th season on NBC? The television vulture is watching all the latest cancellation and renewal news, so this page is the place to track the status of America’s Got Talent, season 17. Bookmark it, or subscribe for the latest updates. Remember, the television vulture is watching your shows. Are you?

Airing on the NBC television network, America’s Got Talent is a talent competition that features an impressive array of singers, dancers, comedians, contortionists, impressionists, magicians, ventriloquists, and hopeful stars. The winning act receives a $1 million prize and the chance to headline in the America’s Got Talent Live show in Las Vegas. In season 16, Terry Crews returns as host, and Howie Mandel, Simon Cowell, Heidi Klum, and Sofía Vergara are back at the judge’s table. This season promises some of the wildest acts to ever grace the AGT stage after an unprecedented number of submissions poured in from across the country.

The 16th season of America’s Got Talent averaged a 0.81 rating in the 18-49 demographic and 6.60 million viewers. Compared to season 15, that’s down by 21% in the demo and down by 9% in viewership in the live+same day ratings (including DVR playback through 3:00 AM). While these numbers don’t include further delayed or streaming viewing, they are a very good indicator of how a show is performing, especially when compared to others on the same channel. There can be other economic factors involved in a show’s fate, but typically the higher-rated series are renewed and the lower-rated ones are cancelled. Find out how America’s Got Talent stacks up against other NBC TV shows.

Will NBC cancel or renew America’s Got Talent for season 17? This series is a staple of the NBC summer schedule and has remained one of the network’s highest-rated shows. I have no doubt that it will be renewed. However, it’s worth noting that the show will be airing only one night a week this time around — the first time this has happened since 2007. Perhaps the end is closer than we imagine. I’ll update this page with breaking developments. Subscribe for free alerts on America’s Got Talent cancellation or renewal news.

What do you think? Are you glad that the America’s Got Talent TV show has been renewed for a 17th season? How would you feel if NBC had cancelled this TV series, instead?

I’m hoping America’s Got Talent comes back for season 17. It is one of the best T.V. shows for entertainment. There is such a variety of talent. I’ve been watching it since it started.

Please keep America’s Got Talent on TV. I am looking very forward to watching season 17. It is interesting, it is funny and is overall enjoyable to watch.