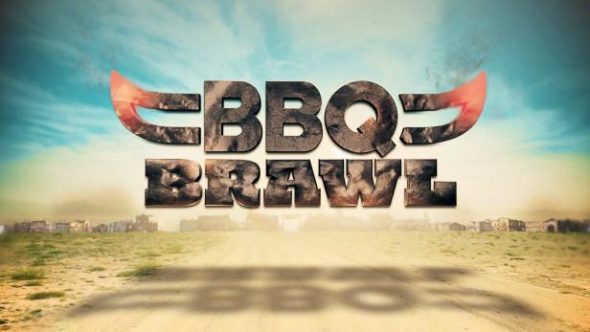 Food Network revealed the following about the return of BBQ Brawl:

“The brawl returns with superstar chefs Anne Burrell and Jet Tila challenging the undefeated champion, Bobby Flay, for a chance at leading Food Network’s next ‘Master of ‘Cue’ to victory in the new season of BBQ Brawl, premiering with a special 90-minute episode on Monday, May 9th at 9pm ET/PT on Food Network. Through eight episodes, Bobby, Anne, and Jet mentor and coach nine upcoming stars in the barbecue world with culinary battles that test their skills and their ability to work together as a team. With the captains guiding their teams every step of the way, a panel of judges featuring barbecue legend Rodney Scott, famed chef Brooke Williamson, and lifestyle personality Carson Kressley decide which competitor is worthy of being crowned ‘Master of ‘Cue’ and appear across Food Network’s digital platforms to become its official BBQ expert for the year.

Set at the famed Star Hill Ranch in Austin, Texas, the competitors are divided into three teams under the tutelage of Bobby, Anne, and Jet. In each episode the captains must do everything in their power to keep their team members in the game – including diving into the action themselves – guiding the hopefuls in two rounds of grilling and smoking challenges. The team that is determined by the judges to be least successful in the challenges will have one of their contenders eliminated. Bobby, Jet and Anne will give it their all to stay in contention, but in the end, only one competitor and captain will reign supreme. Viewers can also stream BBQ Brawl on discovery+ with new episodes available weekly, starting Monday, May 9th.

“This year’s intense barbecue challenges, breakout BBQ hopefuls, and top-flight Food Network chefs that put their reputations on the line has BBQ Brawl promising to again strike a chord with viewers this season,” said Courtney White, President, Food Network and Streaming Food Content, Discovery Inc. “With Anne Burrell and Jet Tila challenging Bobby with their competitive DNA and deep culinary experience, the excitement this season runs hotter than ever.”

The new batch of contenders arrive at the ranch in the premiere and must introduce themselves to the captains by making a signature skewer that packs big flavor in a little bite in hopes of being picked by Bobby, Anne, and Jet for their team. Then, the competitors face off in the first team brawl full of high stakes and featuring a major competition-changing twist. In another episode, the BBQ hopefuls showcase their talent by creating a dinner party in two hours using only the ingredients provided to them in coolers stocked with everything you would find in the kitchens of different households. And see what happens when the competitors are challenged to communicate with BBQ lovers across social media to prove they can cook and connect with fans wherever they may be. The competitors that make it to the finale have one more chance to prove themselves worthy of the ‘Master of ‘Cue’ title and walk away with ultimate bragging rights. The remaining competitors must go all out to impress the judges as they cook a full BBQ dinner feast in only six hours using a whole suckling pig. But it won’t be easy, as the judges throw twists and turns at the competitors throughout the challenge.”

What do you think? Are you planning to check out season three of BBQ Brawl on Food Network this May?

Do not like Jet because he’s an overbearing, loudmouth hack. Will definitely not be watching this season. Love the show otherwise.

Where are Eddie Jackson and Michael Simon? Love Jet Tilla, not a fan of Ann Burrell! The judges are great with the exception of Brooke Williams! Cant stand her! STOP fixing things that are not broke! Ratings are going to drop! I looked forward to the back and forward with Michael and Eddie! Not good Food Network! Bobby Flay is a BRAT!

Disappointed they are changing the hosts. You can’t have this show without the chemistry of Flay and Symon. Anne Burrell is boring to watch and does not seem like all that great of a cook. I feel like Food Network is always trying to shove her down our throats to watch and no one really cares. Jet Tula is great and has a great personality but they definitely need Michael Symon for this show to work. The addition of Brooke Williamson was great but as much as I like Carson this is not the show for him. He knows nothing… Read more »