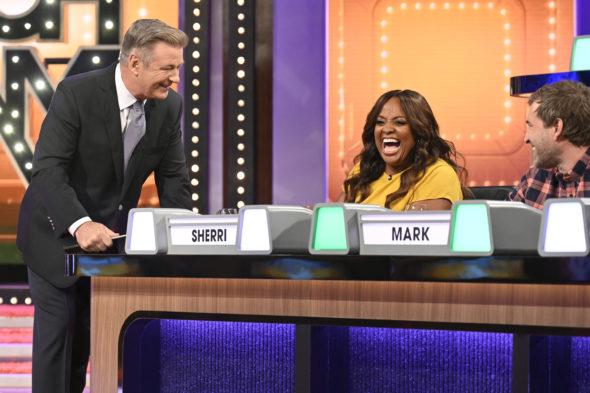 ABC might have a “blank” spot in their schedule. The alphabet network has reportedly cancelled the Match Game TV show so it won’t be back for a sixth season. The last original episode aired on July 28th of last year.

A revival of the classic 1970s game show, Match Game is hosted by Alec Baldwin. Contestants try to match the answers of six celebrity panelists as they answer fill In the blank questions. In the fifth season, celebrity panelists include Sam Richardson, Jane Krakowski, Ben Schwartz, Caroline Rhea, James Van Der Beek, Vivica A. Fox, Joel McHale, Amy Sedaris, Kevin Smith, Raven-Symoné, Ne-Yo, Malin Akerman, Mario Cantone, Jennifer Esposito, Adam Rodriguez, Angie Harmon, Michael Chiklis, and Melissa Fumero. On Match Game, contestants try to match the answers to “fill in the blank” questions with as many celebrities as they can. At stake is a grand prize of $25,000.

The fifth season of Match Game averaged a 0.48 rating in the 18-49 demographic and 3.00 million viewers. Compared to season four, that’s down by 15% in the demo and up by 6% in viewership.

The series has been out of production since before the pandemic and the 11 episodes of season five were spread across two broadcast seasons, airing sporadically between May 2020 and July 2021. A total of 65 installments were produced since this version of Match Game launched in 2016.  Variety was the first to report the news of the cancellation.

What do you think? Did you watch this iteration of Match Game on ABC? Are you disappointed that it’s been cancelled and won’t return for a sixth season?

I watched it and very disappointed it is cancelled. The show should have cast some of the original panelists like Betty White (before she passed away). Just get a new host like Joel McHale (who is no longer host of Card Sharks).

I love Match Game♥️ Why don’t you try getting a new host?

That’s too bad. I remember as a child how that show would crack me up and Baldwin’s version was just as good. This show was actually the first thing I thought of when I heard about her current troubles.

I really enjoy match game both the older ones and the great new ones we need to get this back on air maybe with a new host but Alec Baldwin made that show So Great!!

Well every time there is a good show on it gets canceled!!!! EVERY TIME…I have said this over and over …what’s the problem with Match Game ? Too funny ? I don’t know who decides this stuff but THEY SUCK. !

Extremely , about match Game ! I was afraid this would happen.

Bring Match game back. I am really getting fed up with ABC and the programming

I hate you ABC! I loved match game and found it very entertaining and Alec Baldwin was hilarious So bring it back please

Yes, we do know why it was canceled. It is strange that all the others were canceled as well. But the other game shows weren’t that good. So ABC just decided to axe them all at the same time. Sometimes I cant figure out ABC’s reasoning for what they do. Hey if they need a new host for Match Game. Chris Harrison might be available.

Well it’s obvious why this got cancelled…Wish they could’ve just gotten another host!!!

I thought that too until I saw they cancelled three other game shows at the same time. I can’t imagine anything cheaper to produce, so maybe ABC just thinks it’s not classy to have so many game shows in prime time? Maybe the advertisers were complaining.