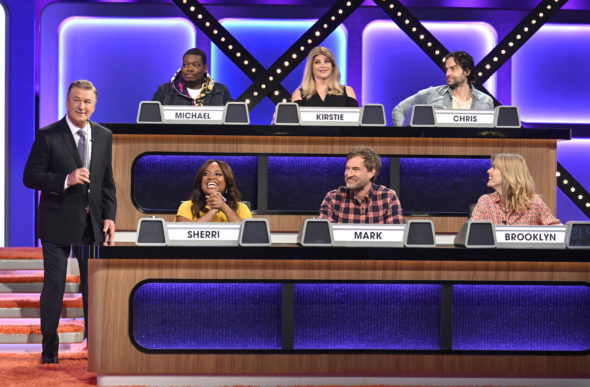 How many “blanks” can this show run? Has the Match Game TV show been cancelled or renewed for a sixth season on ABC? The television vulture is watching all the latest cancellation and renewal news, so this page is the place to track the status of Match Game, season six. Bookmark it, or subscribe for the latest updates. Remember, the television vulture is watching your shows. Are you?

Airing on the ABC television network, Match Game is hosted by Alec Baldwin. Contestants try to match the answers of six celebrity panelists as they answer fill In the blank questions. In the fifth season, celebrity panelists include Sam Richardson, Jane Krakowski, Ben Schwartz, Caroline Rhea, James Van Der Beek, Vivica A. Fox, Joel McHale, Amy Sedaris, Kevin Smith, Raven-Symoné, Ne-Yo, Malin Akerman, Mario Cantone, Jennifer Esposito, Adam Rodriguez, Angie Harmon, Michael Chiklis, and Melissa Fumero. On Match Game, contestants try to match the answers to “fill in the blank” questions with as many celebrities as they can. At stake is a grand prize of $25,000.

Find out how Match Game stacks up against other ABC TV shows.

Will ABC cancel or renew Match Game for season six? The network’s summer game shows are relatively inexpensive to produce and have become a summer staple. I think Match Game will be renewed. I’ll update this page with breaking developments. Subscribe for free alerts on Match Game cancellation or renewal news.

What do you think? Were you hoping that the Match Game TV show would be renewed for a sixth season? Are you sorry that ABC cancelled this TV series, instead?

Hi, Variety just reported that Match Game has been cancelled, so it won’t return for season 6. Deadline reported the news as well. Sucks though; really liked the show.

Please bring it back NOW!

I like the Match Game. Always have, always will. You might want to start looking for a new host. I think Alec Baldwin is just about finished. Above and beyond all that, I do wish you would pick celebrities that I know who they are. For the most part, you pick these so-called celebrities that I’ve never heard of.

Unfortunately, given Alec’s run in with the law and potential lawsuits about to occur, it may be a while before we hear of any MATCH GAME news. If they want to bring it back and have a new host, I recommend Dave Coulier of FULL HOUSE, he does very good impersonations.

Bring back The Match Game. It’s sooo GOOD. I look forward to it every week!!!!!!!

Miss Match Game. Only saw one new episode. What is going on? Please bring it back. It is the most enjoyable game show on TV.