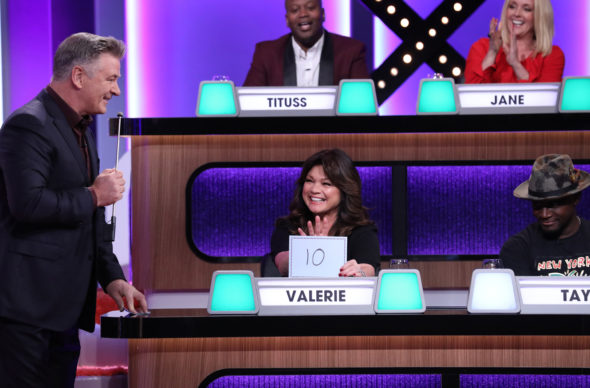 Is the third season of the Match Game TV show on ABC a winner or a loser? As we all know, the Nielsen ratings typically play a big role in determining whether a TV show like Match Game is cancelled or renewed for season four. Unfortunately, most of us do not live in Nielsen households. Because many viewers feel frustration when their viewing habits and opinions aren’t considered, we’d like to offer you the chance to rate all of the Match Game season three episodes here.

An ABC game show hosted by Alec Baldwin, Match Game features contestants trying to match the answers to “fill in the blank” questions with as many celebrities as they can. At stake is a grand prize of $25,000. Celebrity panelists in season three include: Joel McHale, Niecy Nash, Mark Duplass, Caroline Rhea, Jason Ritter, and Constance Zimmer.

What do you think? Which season three episodes of the Match Game TV series do you rate as wonderful, terrible, or somewhere between? Should ABC cancel or renew Match Game for a fourth season? Don’t forget to vote, and share your thoughts, below.

Please make sure that Take Two has a season 2. It is a good show that has police, love and action scenes. I have been seeing it since the beginning. LOVE THE SHOW. The main actor chemistry is fantastic.

Love it and need it! It’s pure FUN! And, isn’t that what entertainment should be about? Just the therapy we all need for our world-weary minds and hearts. Alec Baldwin’s droll and cheeky presentation breaks all the rules and sets free the inner political incorrectness within us that secretly longs to be released! But, in a nice way! It’s downright liberating! We need to laugh, especially at ourselves, and we need to be a little naughty now and then. Please renew Match Game forever.

I love the new Match Game! All is good! Makes my Wednesday nights! I like Alec Baldwin ! Great show’ loved it as a kid and love the ne version!

I loved the show as a kid with Gene Rayburn hosting. I’m not a big fan of Baldwin. If he needs replaced Craig Ferguson would fit the profile for this show and he would be hilarious interacting with stars and Contestants.