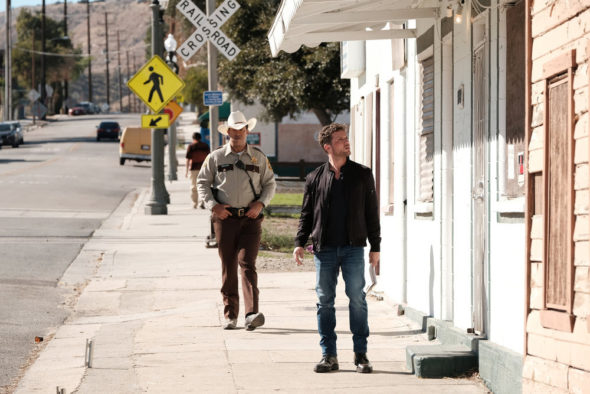 How on target is the third season of the Shooter TV show on USA Network? As we all know, the Nielsen ratings typically play a big role in determining whether a TV show like Shooter is cancelled or renewed for season four. Unfortunately, most of us do not live in Nielsen households. Because many viewers feel frustration when their viewing habits and opinions aren’t considered, we’d like to offer you the chance to rate all of the Shooter season three episodes here.

A USA Network action drama, Shooter stars Ryan Phillippe, Omar Epps, Shantel VanSanten, Cynthia Addai-Robinson, and Jesse Bradford. Based on Stephen Hunter’s novel, Point of Impact, and the 2007 Mark Wahlberg film, Shooter centers on expert marksman Bob Lee Swagger (Phillippe). Despite being retired and living in exile, Swagger is coaxed back into action for the most important mission of his lifetime. In the third season, he discovers details surrounding his father’s death, which lead toward a shocking conspiracy.

What do you think? Which season three episodes of the Shooter TV series do you rate as wonderful, terrible, or somewhere between? Should USA cancel or renew Shooter for a fourth season? Don’t forget to vote, and share your thoughts, below.

8/15/18 update: USA Network has cancelled the Shooter TV show after three seasons. Will there still be a fourth season? Details here.

I love this show ,please don’t cancel ,reconsider to air this show

Sure it is the best series I’ve heard in a long long time please bring season for back and make a season five I need Bob Lee swagger in my life Lord please Don’t take shooters please give it back I need my show back let Bob Lee swagger and his team do they thing .I watched all three seasons back to back is good from beginning to the end.

I have the same comment as many others: due to the change in tv for the last few years that put an end to repeats of Fall shows during the summer, and now new series being aired in the summer… I have NO idea when these new shows are or when new seasons begin. PLEASE do not cancel our favorite shows due to your inability to properly advertise when and where to watch new show or new seasons of shows. I just found this website and am sadly learning that many shows I recently starting watching on Netflix et al,… Read more »

I love the show “shooter”. Always great story lines, lots of action. Please don’t cancel the show. We enjoy watching it at our house.

Please come back with Season 4 of Shooter!!! Love it.

PLEASE CONTINUE THIS SHOW!! IT IS THE BEST!!!

It’s to bad that there isn’t more advertisement of a show returning to air. I see this to many times. There is such a long break between seasons that it gets put back on the back burner and we as viewers hope to catch when it returns. I’m not a big TV watcher, but when I find a series I like I’m loyal to it. It makes me sad that to see the ratings low. I feel the reason is what I have just commented on. I don’t know how it can be corrected, but something needs to be done.… Read more »

Please keep “Shooter” going. It’s a great series. Unfortunately, we didn’t even know Season 3 began until I saw an article about ep. 1 online. We had to watch that one on the playback channel. There was little or no advertising on TV about it’s return date. Great stories, great cast, & great writers! Please don’t cancel!

Please don’t cancel the shooter. I love the show. It’s the best show on tv. The actors are perfectly picked and thdd writers are great.