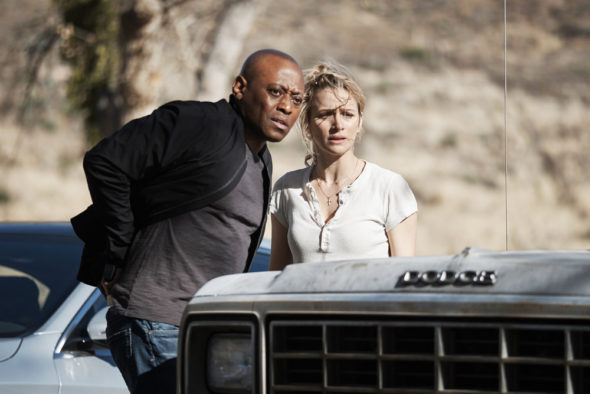 Will Bob Lee Swagger’s life ever get back to normal? Has the Shooter TV show been cancelled or renewed for a fourth season on USA Network? The television vulture is watching all the latest cancellation and renewal news, so this page is the place to track the status of Shooter, season four. Bookmark it, or subscribe for the latest updates. Remember, the television vulture is watching your shows. Are you?

A USA Network action drama, Shooter stars Ryan Phillippe, Omar Epps, Shantel VanSanten, Cynthia Addai-Robinson, and Jesse Bradford. Based on Stephen Hunter’s novel, Point of Impact, and the 2007 Mark Wahlberg film, Shooter centers on expert marksman Bob Lee Swagger (Phillippe). Despite being retired and living in exile, Swagger is coaxed back into action for the most important mission of his lifetime. In the third season, he discovers details surrounding his father’s death, which lead toward a shocking conspiracy.

The third season of Shooter averaged a 0.18 rating in the 18-49 demographic and 730,000 viewers. Compared to season two, that’s down by 47% and 42%, respectively. Check out how Shooter stacks up against other USA Network TV shows.

Will USA Network cancel or renew Shooter for season four? The ratings are way down but it’s still a middle-of-the-road performer for the channel. I think it will be renewed but they could easily cancel it instead. I’ll keep an eye on the ratings and update this page with breaking developments. Subscribe for free Shooter cancellation or renewal news.

8/15/18 update: USA Network has cancelled the Shooter TV show after three seasons. Could there still be a fourth season? Details here.

What do you think? Were you hoping that the Shooter TV show would be renewed for season four? Are you sorry that USA Network cancelled this TV series, instead?

Put it directly on Netflix or FX

We need season 4 omg what’s the hold up

Please please put this show back please thank you USA

Of course season 4!!!!!! Great Not full of filthy language!!! REFRESHING!!

Very good show. It should be renewed. Put it on Fox. It would be a tremendous hit.

A good show. Very disappointed it was canceled. Will it ever be renewed??

Fantastic show, why cancel it. Such a bad ending, bring back Bobby’s wife which can be easily done as a pretend funeral to keep her safe.

Really like the Shooter series. Hope it comes back