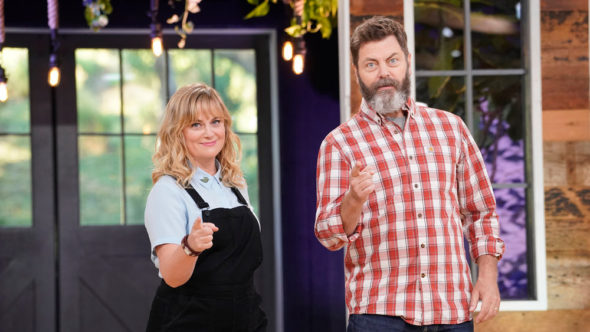 NBC is in the mood for more crafts. Today, the network announced they’ve renewed Making It for a second season.

Hosted by Nick Offerman and Amy Poehler, the reality competition show features accomplished crafters taking on “Faster-Craft” and “Master Craft Collection” challenges, in hopes of securing the title of “Master Maker” and the grand prize of $100,000. Simon Doonan, the Creative Ambassador for Barneys New York, and Dayna Isom Johnson, an Etsy trend expert, judge the competition.

Making It debuted in July and has been holding steady in the ratings so far. Three episodes in and the NBC series is averaging a .97 rating in the 18-49 demo and 4.381 million viewers.

UNIVERSAL CITY, Calif. – Aug. 21, 2018 – NBC, in the midst of another summer where it’s once again beading the competition handily, is ordering a second season of its newest hit series, “Making It,” from Universal Television Alternative Studio.

Hosted by “Parks and Recreation” alums and best friends Amy Poehler and Nick Offerman, “Making It” is a uniquely lighthearted competition series that celebrates the creativity and craftiness in all of us.

“Seeing firsthand the imagination of a true craftsman and, literally, watching them create something out of nothing is pure gold,” said Paul Telegdy, President, Alternative and Reality Group, NBC Entertainment. “Amy and Nick’s longtime friendship and affection for one another brings the show to a whole other level of fun and we look forward to seeing what season two will bring.”

“We set out to make a boundlessly affirmative and inspiring show and we are thrilled with the way viewers and the press have embraced it,” said Meredith Ahr, President, Universal Television Alternative Studio. “Amy and Nick bring creativity, leadership and comedic brilliance to everything they do and we can’t wait to team up with them again and shine a light on a new group of talented makers.”

“We’re sew excited to be ‘Making It’ again,” said Amy Poehler & Nick Offerman. “We promise season two will have you glued to your seat.”

Entertainment Weekly calls the show “a down-home delight that will take you by complete supplies” while the Atlantic says the series is a “total joy, a cashmere-swaddled hug of a show that exudes geniality and zany warmth.” The Washington Post adds that “Making It” is “genuinely good-hearted and adorably inventive.”

“Making It” has earned a 1.4 rating in adults 18-49 and 6.3 million viewers overall in “live plus seven day” Nielsens for its debut telecast, making it the #1 most-watched premiere of a new summer series on the Big 4 networks this year and tying it for #1 in adults 18-49. Through its three episodes, “Making It” has dominated the timeslot’s ABC-CBS competition, winning across every key demographic.

“Making It” is also NBC’s top alternative-series premiere to date in projected 18-49 ratings on digital (NBCD/Hulu; according to records that go back to the 2014-15 season). After 13 days of availability, the “Making It” debut has scored a 0.49 digital projected rating in 18-49, putting it ahead of the prior record of a 0.30 for last summer’s premiere of “World of Dance.”

“Making It” is also NBC’s top alternative-series debut on a full-episode views basis, with 999,000 FEP streams on NBCD and Hulu combined. NBC’s previous record holder among alternative-series premieres was once again “World of Dance” (860,000).

In this competition, eight of the most talented makers from across the country have taken on a variety of handmade projects with the hopes of impressing Poehler, Offerman and expert judges Simon Doonan and Dayna Isom Johnson. Poehler and Offerman both share a love and passion of craftsmanship, albeit from different perspectives. Poehler is a self-proclaimed crafting novice who has long harbored a secret appreciation for those who can imagine and execute incredible things by hand. Offerman is a New York Times best-selling author in the woodworking space and is well known for his love for making a variety of objects himself.

For those interested in appearing on season two, please visit nbc.com/casting for more information.

What do you think? Are you a fan of Making It? Are you glad it’s coming back for another season?

Looks like “Season” 2 is a go, but it will be SHORT. I read it it scheduled to air in December over a two week period. NOT the same, now is it? Bring back the full season, please.

when is season 2 supposed to air?

I am a fan and also a seller on ETSY so I am thrilled. The show was great and a wonderful boost to our business.

Yes, I am a Fan! Mostly loved Amy and Nick as hosts.
As an art teacher, I would LOVE to know if/where they purchased the cool tables for the show or if they simply created them for the show.!!!

Comforting to know reality shows can be real, good on you Amy and Nick!!!

I love this show. The creative process, personalities of contestants and positive, kind interaction of all the cast make it a joy to watch.
My only suggestion is more close ups of contestants creating and longer views of finished products.

This confirms the networks are desperate to broadcast anything. This show is truly lame in all aspects. I couldn’t watch one full episode.