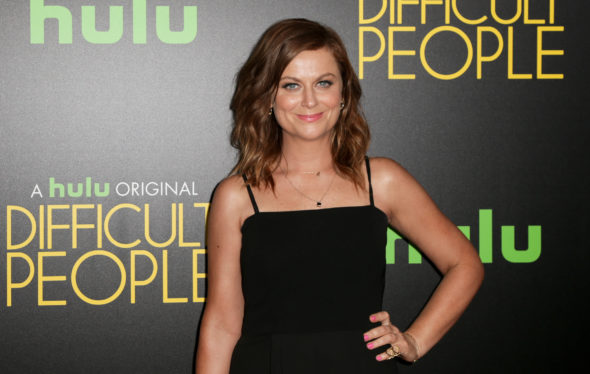 NBC is staging a mini Parks and Recreation reunion — sort of. The peacock network has picked up a new competition series called The Handmade Project and it will star Parks and Rec veterans Amy Poehler and Nick Offerman. NBC has ordered six episodes of the series that will revolve around “artists who make things by hand”.

UNIVERSAL CITY, Calif. – March 28, 2017 – NBC is getting crafty with a six-episode order for “The Handmade Project,” a competition series that celebrates artisanship and the makers who can create amazing things with their hands … and a few tools too.

The series will reunite “Parks and Recreation” stars Amy Poehler and Nick Offerman. Poehler and Offerman both share a love and passion of craftsmanship, albeit from different perspectives.

“I’m thrilled to be celebrating artists who make things by hand, and I’m looking forward to finally conquering my fear of paper mache,” Poehler said.

Said Offerman: “People who make things are my favorite kind of folk. Practical, clever and terrific in a pinch. That makes me tickled pink to have a front row seat at this prodigious display of talent, and admiring and cheering on an amazing crop of American makers. Plus, Amy and I have a strong tradition of tomfoolery so let’s see if we don’t have some good fun.”

“With millions of mass-produced products, a handmade item can be the most valuable treasure one can possess because it’s one of a kind and made with love,” said Meredith Ahr, President, Universal Television Alternative Studio. “We are thrilled that Amy Poehler’s first venture into the unscripted space is so refreshingly unexpected and original, and can’t wait to see Amy and Nick back together again!”

Poehler is a self-proclaimed crafting novice who has long harbored a secret appreciation for those who can imagine and execute incredible things by hand. Offerman is a New York Times best-selling author in the woodworking space, owner of Offerman Woodshop in Los Angeles and is well known for his love for making a variety of objects with his own two hands

Each week eight of America’s best all-around makers, from all walks of life, will undertake a series of projects they must complete in their own unique way with the hopes of impressing Poehler, Offerman and our expert judges. Over the course of each episode, the contestants must tackle a different theme, hand-making items in different disciplines – the difficulty of which increase as the competition unfolds. Shot in a serene outdoor setting, this friendly competition will ultimately crown a winner at the end of the six-week journey, but the series will focus on the characters and camaraderie of those who enjoy creating their own crafts, all under the comedic guidance of Poehler and Offerman.

Participants of all ages – many of whom are eager to share their craft making skills on social media – will be featured on the series with skill sets as wide-ranging as woodwork, quilting, knitting, scrapbooking, cake decorating, metal work, doll making and general crafting. Artisans and makers of any type or any creative person who loves making things by hand are welcome.

Makers who would like to compete in “The Handmade Project” can apply at handmadeprojectcasting.com.

What do you think? Do you like the sound of this new series?