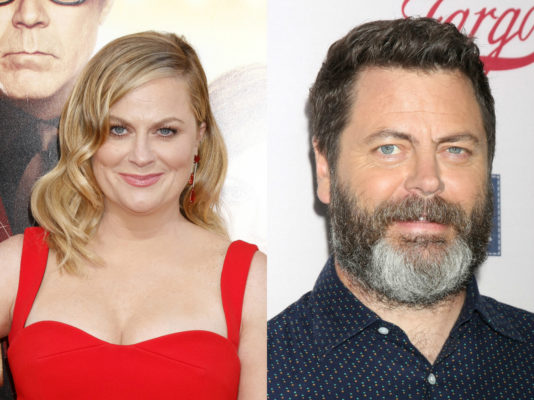 Nick Offerman and Amy Poehler are reuniting. This week, NBC announced the two will host a new TV show called Making It.

The series “brings together eight of the country’s most talented Makers to tackle a variety of handmade projects with the hopes of impressing Poehler and Offerman as well as judges Simon Doonan, Creative Ambassador for Barneys New York, and Dayna Isom Johnson, Etsy trend expert.”

The series brings together eight of the country’s most talented Makers to tackle a variety of handmade projects with the hopes of impressing Poehler and Offerman as well as judges Simon Doonan, Creative Ambassador for Barneys New York, and Dayna Isom Johnson, Etsy trend expert.

“At the very most, you will fall in love with our Makers, get introduced to a world you may not know anything about and even get inspired to make something at home! At the very least, you will learn what vellum is,” Poehler said.

“As a woodworker myself, I’m awfully proud to showcase all these talented Makers and be reunited with my charismatic pal Amy to boot,” Offerman said. “The question is: Is America thready for this? (Strap in, our show will be pun heavy).”

Every show will revolve around a central theme that draws inspiration from hugely popular nationwide trends in crafting and DIY, which the whole family can enjoy.

Each episode of the competition will consist of two projects, cleverly designed by Poehler and Offerman, that test the Makers’ ability to think outside of the box in unpredictable ways. Believing there is no better way to express yourself than by making things by hand, the challenges are also designed to bring out skilled insights and takeaway, touching personal stories and lots of laughs.

First, the “faster-craft” round will be a timed challenge that will test their ability to not only work quickly but imaginatively as well. Next, the Makers will move to the “master craft collection,” a one-of-a-kind themed challenge in which the competitors will need to use their expertise and get inventive in order to assemble a winning craft that fits the theme of that week. In the end, only one will emerge victorious and be named “Master Maker.”

Poehler and Offerman both share a love and passion of craftsmanship, albeit from different perspectives. Poehler is a self-proclaimed crafting novice who has long harbored a secret appreciation for those who can imagine and create incredible things by hand. Offerman is a New York Times bestselling author in the woodworking space and is well known for his love for making a variety of objects himself.

Blending the atmosphere of a serene outdoor setting and innovative cinematography designed to showcase the beautiful craftsmanship at work, this friendly competition will focus on the character and camaraderie of the crafting community and, through it all, Poehler and Offerman will provide heartfelt encouragement, guidance and plenty of laughs.

What do you think? Are you a fan of Amy Poehler and Nick Offerman? Will you watch Making It?

I AM SO EXCITED FOR THIS. I love them both and cannot wait to see them together again. I will literally watch anything they make.