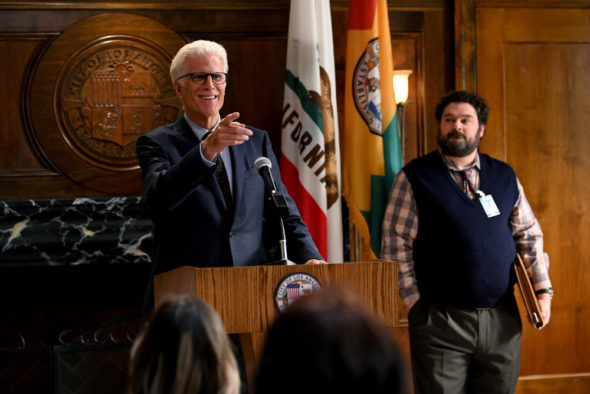 How long will this guy stay in office? Has the Mr. Mayor TV show been cancelled or renewed for a second season on NBC? The television vulture is watching all the latest cancellation and renewal news, so this page is the place to track the status of Mr. Mayor, season two. Bookmark it, or subscribe for the latest updates. Remember, the television vulture is watching your shows. Are you?

Airing on the NBC television network, the Mr. Mayor TV show stars Ted Danson, Holly Hunter, Vella Lovell, Mike Cabellon, Kyla Kenedy, and Bobby Moynihan. The story follows retired and wealthy businessman Neil Bremer (Danson) who runs for mayor of Los Angeles for all of the wrong reasons — just to prove that he’s “still got it.” Once he wins, Neil has to figure out what he stands for and gain the respect of his staff and his biggest critic and political rival, Arpi Meskimen (Hunter). At the same time, he also wants to connect with his rebellious teenage daughter, Orly (Kenedy).

The first season of Mr. Mayor averaged a 0.52 rating in the 18-49 demographic and 3.42 million viewers. Find out how Mr. Mayor stacks up against other NBC TV shows.

Will NBC cancel or renew Mr. Mayor for season two? The ratings aren’t great but, since this series comes from Tina Fey and Robert Carlock and stars Ted Danson, all NBC favorites, I think Mr. Mayor will be renewed. I’ll update this page with breaking developments. Subscribe for free alerts on Mr. Mayor cancellation or renewal news.

What do you think? Are you glad that the Mr. Mayor TV show has been renewed for a second season? How would you feel if NBC had cancelled this TV series, instead?

Didn’t finish first episode. Not going to follow a protagonist that is stupid enough to think banning plastic straws is a good idea

Mr. Mayor is on my weekly ‘to watch’ list. Could not find it..as it suddenly disappeared. Very pleased it WILL be renewed. What is the new season starting date?

Best sitcom in years. I look forward to watching it every week. Got all 9 episodes season 1 on DVR, Please do not cancel.

Don’t Cancel!! We love this show! All the characters are so great! My husband and I are really enjoying the show.

I hope Mr. Mayor is not going to be canceled. It is very funny and clever. It needs time for people to discover it. Too many good shows are not given time to catch on. The networks cancel shows too quickly. Seinfeld is an excellent example of this. It was not popular in season one, yet it became one of TV’s most beloved and successful shows because it was given a chance. Give Mr. Mayor a fighting chance!

I hope Mr Mayor is renewed as it is funny and all the characters are quirky. I am already missing it now that season 1 is over.

Please keep Mr. Mayor on the air, as it is one show that everyone in our family enjoys. We have, actually, been streaming it on Peacock, and are about to run out of episodes. Is it possible to stream the show directly to Peacock, as Bridgertons is done on Netflix? That is, if cancelled on regular TV. In recent years, households have been streaming shows anyway.

I really hope that Mr. Mayor is renewed for a second season and that they don’t get rid of it like they did with Better off Ted. Our world could use more comedy to lift our spirits, especially with all the seriousness, political correctness, and grief we’re having to weather. Plus, it might be something that would actually keep viewers coming back to the platform, along with buying the network more time so they can evolve to adapt to the changing audience entertainment consumption patterns. Just a thought, perhaps it’s better to look at long term play over the short… Read more »

I really hope that there’s a season 2 of Mr. Mayor and that they don’t get rid of it like they did with Better off Ted. We need more comedy in our lives to allow us to take a mental break from all the seriousness in our lives. We need networks to keep producing shows such as Mr. Mayor to help to draw audiences to their platform, so they can buy time on how to evolve.

I heard that the “season finale” is today’s episode, the 9th. But there was an order for 13 episodes. I heard COVID halted production, but I can’t tell if that resulted in a shorter season or if it’s been pulled early and it’s over.

Only nine episodes were produced. It’s not being pulled early.

I started DVRing cause there’s so many jokes that fly by too fast. It’s also getting better every week. Love it.

Ted Danson is better than this. Mr Mayor is a disappointment….

Not the same role as in Cheers; Ted Danson has atured & is a perfect fit for this clever show.