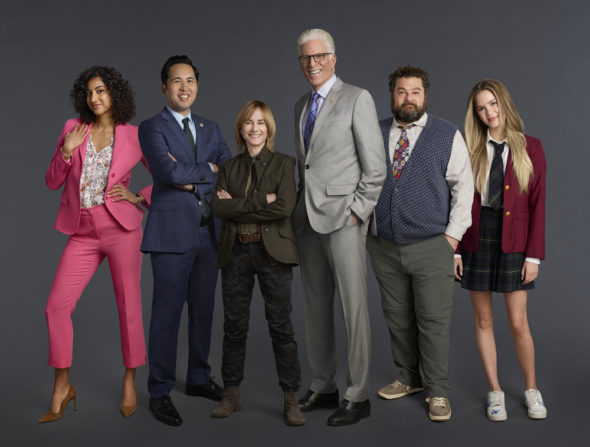 Wealthy Neil Bremer (Danson) runs for mayor of Los Angeles for all of the wrong reasons — just to prove that he’s “still got it.”

Once he wins, Neil has to figure out what he stands for while gaining the respect of his staff and his biggest critic and political rival, Arpi Meskimen (Hunter). At the same time, he also wants to connect with his rebellious teenage daughter, Orly (Kenedy).

Series Finale:
Episode #20 — The Debate
Arpi and Neil square off in the televised mayoral recall debate. James reveals information that may change the course of his and Mikaela’s relationship.
First aired: May 17, 2022.

What do you think? Do you like the Mr. Mayor TV show? Do you think it should have been cancelled or renewed for a third season?

Mr. Mayer is one of the funniest comedies on TV. I am soo sorry to see it cancelled

Sure hope this show is renewed. It’s cute and funny. Nice for a mindless evening entertainment.

Loved it when are new episodes airing????

Ted Danson is gold and should be always on TV. brings a smile to everyone who watches him.

I hope the series is picked up. I love Ted Danson & would love to see more episodes.

BEST SHOW!!! Been waiting for a show like this since 30 ROCK!! HILARIOUS!!
LOVE LOVE LOVE it!!