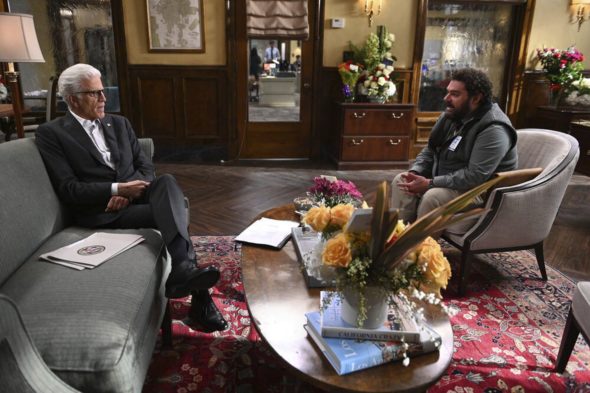 How will viewers vote — with their remotes? Has the Mr. Mayor TV show been cancelled or renewed for a third season on NBC? The television vulture is watching all the latest cancellation and renewal news, so this page is the place to track the status of Mr. Mayor, season three. Bookmark it, or subscribe for the latest updates. Remember, the television vulture is watching your shows. Are you?

Airing on the NBC television network, the Mr. Mayor TV show stars Ted Danson, Holly Hunter, Vella Lovell, Mike Cabellon, Kyla Kenedy, and Bobby Moynihan. The story follows Neil Bremer (Danson), a retired and wealthy businessman who runs for mayor of Los Angeles for all of the wrong reasons — just to prove that he’s “still got it.” Once he wins, Neil has to figure out what he stands for and gain the respect of his staff and his biggest critic and political rival, Arpi Meskimen (Hunter). At the same time, he also wants to connect with his rebellious teenage daughter, Orly (Kenedy).

The second season of Mr. Mayor averaged a 0.29 rating in the 18-49 demographic and 1.73 million viewers in the live+same day ratings. Compared to season one, that’s down by 44% in the demo and down by 49% in viewership in the live+same day ratings (including DVR playback through 3:00 AM). While these numbers don’t include further delayed or streaming viewing, they are a very good indicator of how a show is performing, especially when compared to others on the same channel. Though other economic factors are involved, the higher-rated shows usually get renewed and the lower-rated ones get cancelled. Find out how Mr. Mayor stacks up against other NBC TV shows.

Will NBC cancel or renew Mr. Mayor for season three? Danson has starred in a couple of successful comedies — Cheers and The Good Place — for the peacock network. Though the ratings for this latest one didn’t get off to a great start, the show still has a chance at being renewed. I’ll update this page with breaking developments. Subscribe for free alerts on Mr. Mayor cancellation or renewal news.

What do you think? Were you hoping that the Mr. Mayor TV show would be renewed for a third season? Are you sorry that NBC cancelled this TV series, instead?