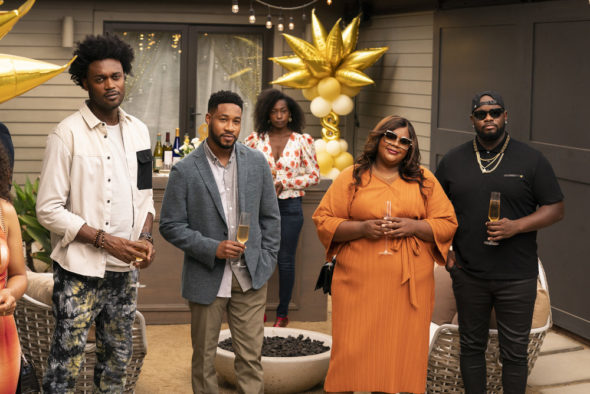 Could this be the new Friends or Happy Endings? Has the Grand Crew TV show been cancelled or renewed for a second season on NBC? The television vulture is watching all the latest cancellation and renewal news, so this page is the place to track the status of Grand Crew, season two. Bookmark it, or subscribe for the latest updates. Remember, the television vulture is watching your shows. Are you?

Airing on the NBC television network, the Grand Crew TV show stars Nicole Byer, Justin Cunningham, Aaron Jennings, Echo Kellum, Grasie Mercedes, and Carl Tart. The story revolves around a group of young professionals in Los Angeles who are all trying to navigate the ups and downs of life and love. One way or the other, they always find time to gather at their favorite bar to “wine down” and unpack it all. Noah (Kellum) is a hopeless romantic who’s too eager to settle down. His sister Nicky (Byer) is a go-getter in real estate who’s also adventurous in romance. Meanwhile, Sherm (Tart) is a low-key genius who plays the dating odds. There’s also Anthony (Jennings), whose true love is his career, and Wyatt (Cunningham), who’s relieved to be married and out of the dating scene. And finally, there’s Fay (Mercedes), who’s recently divorced and looking to start fresh in the City of Angels. These friends prove that life may have its challenges but it’s always better with your crew.

The first season of Grand Crew averages a 0.32 rating in the 18-49 demographic and 1.74 million viewers in the live+same day ratings (including DVR playback through 3:00 AM). While these numbers don’t include further delayed or streaming viewing, they are a very good indicator of how a show is performing, especially when compared to others on the same channel. There can be other economic factors involved in a show’s fate, but typically the higher-rated series are renewed and the lower-rated ones are cancelled. Find out how Grand Crew stacks up against other NBC TV shows.

Will NBC cancel or renew Grand Crew for season two? The peacock network needs successful comedies so I have no doubt NBC will give this show time to succeed. The early ratings weren’t very good but we’ll have to wait and see how the rest of the season goes. I’ll update this page with breaking developments. Subscribe for free alerts on Grand Crew cancellation or renewal news.

What do you think? Do you hope that the Grand Crew TV show will be renewed for a second season? How would you feel if NBC cancelled this TV series, instead?