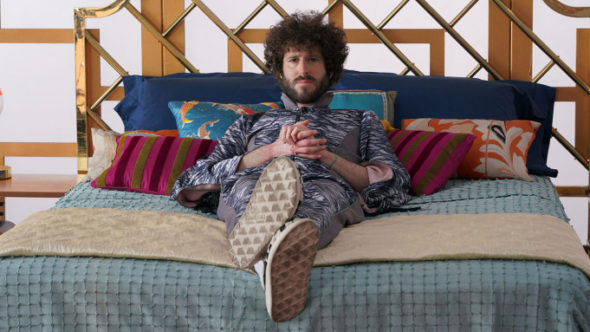 Is this rapper destined for greatness? Has the Dave TV show been cancelled or renewed for a third season on FXX? The television vulture is watching all the latest cancellation and renewal news, so this page is the place to track the status of Dave, season three. Bookmark it, or subscribe for the latest updates. Remember, the television vulture is watching your shows. Are you?

Airing on the FXX cable channel, the Dave TV show stars Dave Burd, Taylor Misiak, Andrew Santino, GaTa, Travis Bennett, and Christine Ko. Guests in season two include CL, Kendall Jenner, Hailey Bieber, Benny Blanco, Kyle Kuzma, Doja Cat, J Balvin, Rae Sremmurd (Swae Lee & Slim Jxmmi), Kareem Abdul-Jabbar, Lil Yachty, Lil Nas X, and Kevin Hart. A single-camera comedy series, it’s based on the life of Burd, a rapper and comedian who’s known as Lil Dicky on stage. The series revolves around a suburban neurotic man named Dave (Burd). He’s in his late twenties and has convinced himself that he’s destined to be one of the best rappers of all time. Now, with the pressure mounting as he records his debut album, Dave has to decide if he’ll sacrifice friendships, love, and his own sense of self in order to make his dream come true. Simultaneously exasperating and inspiring to his friends, Dave vows to leave no stone unturned on his quest to become the next superstar.

The second season of Dave averaged a 0.07 rating in the 18-49 demographic and 150,000 viewers in the live+same day ratings (includes all DVR playback through 3:00 AM). Compared to season one, that’s down by 36% in the demo and down by 29% in viewership in the live+same day ratings (including DVR playback through 3:00 AM). While these numbers don’t include further delayed or streaming viewing, they are a very good indicator of how a show is performing, especially when compared to others on the same channel. Though other economic factors are involved, the higher-rated shows usually get renewed and the lower-rated ones get cancelled. Find out how Dave stacks up against other FXX TV shows.

Will FXX cancel or renew Dave for season three? Though the linear ratings were small, FX says that the first season of Dave was its most-watched comedy series ever. Though the traditional ratings are lower this time around, I think the show will be renewed for a third year. I’ll update this page with breaking developments. Subscribe for free alerts on Dave cancellation or renewal news.

What do you think? Do you hope that the Dave TV show will be renewed for a third season? How would you feel if FXX cancelled this TV series, instead?